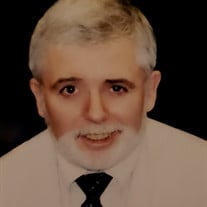 William Pollard (Bill) Holden, 74, passed away peacefully on March 21, 2021 at Novant Hospice in Huntersville, NC after battling Parkinson's Disease for more than 20 years. Bill was born on July 11, 1946 in Pittsburgh, PA to the late Thomas Pollard Holden and Marigrace Halen Holden. In addition to his parents, he is preceded in death by his brother, Terrence (Terry) Holden and granddaughter, Dagen Ruth Holden. He is survived by his children, David and Jennifer (Hager) Holden of Davidson, NC and Jeff Holden and Maggie Gardner of Ithaca, NY. He was the adored "Grangee" to his granddaughters, Maryn and Halen Holden and "Grandpa Bill" to his grandchildren Augie and Willa Holden. He is survived by his siblings Lynne (Holden) and Peter Pace of Cornelius, NC, Bob Holden of Myrtle Beach, SC, Tom and Joan Holden of Sykesville, MD and Tracey (Holden) and Hal Saxby of Columbia, SC, by his four nieces and three nephews and their families, and also by his former spouse Janice Scanlon Holden of Ayer, MA and the Scanlon family. Bill was a proud father, grandfather, brother, uncle, and friend. He graduated from Howard County High School in Columbia, MD where he played football, and later earned a Bachelor's degree in Business and Public Administration-Transportation Management from the University of Maryland College Park. After graduating, he joined the U.S. Department of Transportation, and the National Highway Transportation Safety Administration (NHTSA) where he worked in program management. His work included programs such as the Vince and Larry seatbelt campaign "You Could Learn a Lot from a Dummy" in order to get drivers to use seatbelts regularly, and other programs to educate drivers about the dangers of drunken and impaired driving. He also worked on programs to standardize state driver licensing requirements and identification card issuing and motor vehicle operating standards across the country. In recognition of his body of work, Bill was the presented the Superior Achievement Award, Distinguished Career Service Award and the Exceptional Service Award from the U.S. Department of Transportation. He also received the Distinguished Public Service Award from the United States Coast Guard for his work as Chief of the National Driver Register program to facilitate mariner licensing efforts for the U.S. Coast Guard and Merchant Marine. He retired in 2001 from the U.S. Department of Transportation due to the onset of Parkinson's Disease. Bill was extremely competitive and athletic before Parkinson's disease. He loved playing tennis, racquetball, and golf. He enjoyed watching all sports and was an avid New England Patriots and University of Maryland Terrapins fan. He loved telling corny jokes, often the same ones over and over. He was teased by his granddaughters that his food pyramid was made up of steak and sugar. Bill loved reading, was a history buff, and he liked to say that he was a "fountain of useless information". He loved playing games with family and friends, especially Dominoes, Hearts, and Trivial Pursuit. The family would like to express their sincere gratitude for the wonderful care Bill was given by Cadence of Mooresville, Olde Knox Commons of Huntersville, and Novant Hospice in Huntersville, NC. Their compassion, friendship, and care helped Bill live the last 4 ½ years of his life with dignity. Due to COVID-19, the family will hold a small memorial service on Friday, March 26, 2021 at 5PM in the chapel of Cavin-Cook Funeral Home, 494 East Plaza Drive, Mooresville, NC 28115 www.cavin-cook.com.Masks are required. For those who are unable to attend the service, you may go to the following link for the live stream https://www.youtube.com/channel/UC864hAs96dTRLVVL1la0Qlw/videos?view=2&flow=list A private inurnment service will be held at Meadowridge Memorial Park in Elkridge, MD next week. In lieu of flowers, memorials can be made to The Michael J. Fox Foundation for Parkinson's Research online by visiting www.michaeljfox.org/donate and choose Donate in Tribute or donate by mail at The Michael J. Fox Foundation for Parkinson's Research, Attn: Shannon, Grand Central Station, PO Box 4777, New York, NY 10163-4777. The family would also love for everyone to make a stranger smile in memory of Bill. Tell a corny joke or buy a stranger a vanilla milkshake!

William Pollard (Bill) Holden, 74, passed away peacefully on March 21, 2021 at Novant Hospice in Huntersville, NC after battling Parkinson's Disease for more than 20 years. Bill was born on July 11, 1946 in Pittsburgh, PA to the late Thomas... View Obituary & Service Information

The family of William Pollard “Bill” Holden created this Life Tributes page to make it easy to share your memories.

Send flowers to the Holden family.