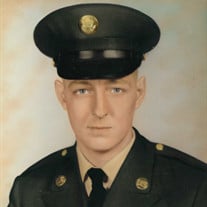 WAYNE NELSON AMOS (4-10-1946 TO 2-12-2021) Wayne Nelson Amos passed away on February 12, 2021 at Lake Norman Hospital, Mooresville, NC. Wayne was born on April 10, 1946 in Alexandria, Va, and he grew up in Bentleyville, Pa.  Wayne graduated from Bentleyville High School in 1965 and then served for four years in the US Army, which included a tour of duty in Vietnam. After being discharged from the Army, he also served for two years in the US Navy. Wayne worked as a machinist and metal fabricator in Florida where he spent much of his adult life with his partner of 29 years, Michelle Hudson, before they moved to Mooresville, NC.   He was a member of Maranatha Baptist Church and served as a deacon there.  Sadly Michelle passed away in 2016.   Wayne had a great passion for fishing and he enjoyed cooking and grilling food.  He was a Steelers fan and became a Panthers fan, also.  Wayne enjoyed singing karaoke with all kinds of music as well as watching old Movies and TV shows.   In recent years, Wayne was happiest when he could spend time with  granddaughter, Madelyn, whom he and Michelle were raising before Michelle's death.  He loved making goofy jokes and hearing Madelyn laugh.  During Michelle's illness, they met Kevin Holzworth and Shasta Clemons and embraced them as family while they helped care for her.  After Michelle's death, Madelyn came to live with Kevin and Shasta and together they cared for Wayne through his illness.   Wayne was preceded in death by his parents, Hamilton M. and Madelyn F. Amos; brothers Hamilton Jr. and John Amos as well as his first wife, Sharon Amos and children Wayne Patrick and Sherry. Survivors include former wife, Sharyn and daughters Melissa Eicher and Robin Huntsman (Justin), and  granddaughter Lillian Eicher and grandsons Chase Amos, Gavin and Brayden Huntsman. Also surviving are four brothers: James, Frank, Bill and Will Amos and sisters-in-law Lori, Kathy, Linda, Diane and Cheree Amos; a step-daughter, Amanda Hudson and step-granddaughter, Madelyn Hudson. The family and friends will have a celebration of Wayne's life on April 10th, the 75th anniversary of his birth. We do wish to observe precautionary methods as we gather.   In lieu of flowers you may make a contribution in his memory to the Vietnam Veterans Fund at:  Vietnam Veterans of America, 8719 Colesville Rd., Silver Spring, MD 20910

The family of Wayne Nelson Amos created this Life Tributes page to make it easy to share your memories.

Send flowers to the Amos family.