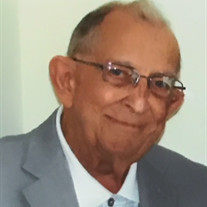 Ronald D. Hartsema passed away peacefully on June 8, 2021 in Mooresville, North Carolina. Born July 29, 1932 in Muskegon, Michigan, he lived there until 1980 when he and his wife Mary Lynne (Wilkinson) moved to Raleigh, North Carolina. Ron was a husband to Mary Lynne for 66 years, father of three, avid golfer, radio and audio enthusiast, and perhaps most notably "the voice of the Grand Haven Musical Fountain." He was a graduate of the Muskegon High School Class of 1950 and spent much of his retirement preparing audio CD mementos for the MHS Class of 1950 Reunion attendees, including his final work on the 70th Class Reunion in the summer of 2020. He served in the US Army during the Korean War and spent his 50-year business career as a manufacturers' representative in the electronics industry. Outside of family, work, and his golf game, Ron was devoted to the Grand Haven Musical Fountain. He was part of the original musical fountain committee in 1962. From 1962 to 2006 he created, produced and recorded over 200 original fountain programs. His signature "Good evening and welcome, I am the Grand Haven Musical Fountain" is well-remembered by many throughout Western Michigan. He was an accomplished golfer and a former member of White Lake Golf Club, then Muskegon Country Club, and finally North Ridge Country Club. He had hundreds of stories about his golf game, golf partners, six holes-in-one, and the vast number of courses he played. All but a few of those stories are actually true. He is survived by his sister, Marlene (Richard) Anderson of Muskegon; son Doug (Jennifer) Hartsema of Mooresville, NC; daughter, Nancy (Larry) Gittleman of Myrtle Beach, SC; granddaughter Sarah Taylor Hartsema and grandsons Sam and Spencer Shores. He was preceded in death by his wife, Mary Lynne who died unexpectedly on August 27, 2020 and his son, Scott. A joint memorial service is being planned for Ron and Mary Lynne this summer in Muskegon.

Ronald D. Hartsema passed away peacefully on June 8, 2021 in Mooresville, North Carolina. Born July 29, 1932 in Muskegon, Michigan, he lived there until 1980 when he and his wife Mary Lynne (Wilkinson) moved to Raleigh, North Carolina. Ron... View Obituary & Service Information

The family of Ronald Dale Hartsema created this Life Tributes page to make it easy to share your memories.

Send flowers to the Hartsema family.