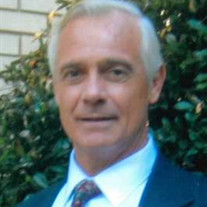 Dr. Robert Pressley Brawley, 68, of Mooresville, passed away peacefully surrounded by his family on Saturday, December 4, 2021. He was born on August 13, 1953 to Bobby and Betty Brawley of Mooresville. He was preceded in death by his loving wife, Beverly Crabb Brawley. In addition to Mr. Brawley's parents he is survived by three sons, Robert Blaine Brawley (Angie) Jason Pressley Brawley (Jennifer), Blake Brawley Huggins (Richard); and daughter Haley Brawley Hanson ((Stephen) and sister: Jane Brawley Jordan, grandsons, Kaleel, Caleb, and Aaron; granddaughters, Allyah and Morgan. He was a graduate of Mooresville High school class of 1971, University of N.C. Charlotte with a BA in 1974, Master in History, Minor in Sociology in 1975 then transferred to Erskine Theological Seminary, Due West, SC with a Master of Divinity and later received his Doctor of Ministry, following his education. Dr. Brawley went on to serve as Minister to the Camden A.R.P. Church in Camden, AL from 1978-1982, Faith Presbyterian Church, Mt. Mourne, NC from 1981 - 1993, Covenant Associate Reformed Presbyterian Church, Statesville, NC from 1993 - 2009. Glenwood Presbyterian Church, Charlotte, NC in 2010. Preaching, teaching, counseling and administrating serving his congregations. He served on the Board of Directors Upper Room Ministry of Statesville also, the Iredell County Prison Ministry. He was a North Carolina High School Referee 1990-1995, and on the Exchange Club and the Lion's Club. He enjoyed traveling to Hawaii, Europe and other places with his beautiful wife Beverly. They went scubba diving in Mexico and enjoyed summer beach trips with the family. He traveled on Mission Trips to India and Mexico. A memorial service will be held at 1:00 PM on Friday, December 10, 2021 at Covenant Church, Statesville with the Rev. Henry Cowles Bristol III officiating. For those who are unable to attend the service, you may go to the following link for the live stream https://view.oneroomstreaming.com/authorise.php?k=1639016350152812 In memory of Dr. Brawley, donations are to be given to "Samaritan's International" and sent to the following address: 107 Sailview Road, Mooresville, NC 28117. Cavin- Cook Funeral Home, Mooresville, is serving the Brawley family. Condolences may be made to the family at www.cavin-cook.com.

Dr. Robert Pressley Brawley, 68, of Mooresville, passed away peacefully surrounded by his family on Saturday, December 4, 2021. He was born on August 13, 1953 to Bobby and Betty Brawley of Mooresville. He was preceded in death by his loving... View Obituary & Service Information

The family of Dr. Robert Pressley Brawley created this Life Tributes page to make it easy to share your memories.

Send flowers to the Brawley family.