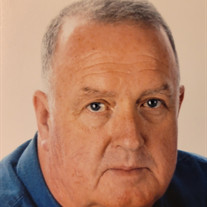 Richard Ray Speaks, 81, passed away on Oct. 11, 2021 after an extended illness. Richard was born at home on Oct. 16, 1939, the second youngest of eight siblings, to Robert and Susie Speaks of West Jefferson. He graduated from Beaver Creek High School in 1957. Following high school Richard was assigned to Co. 703d Maint Bn 3d Inf Div U.S. Army. He was Honorably Discharged after spending three years as a Spc. 5. Afterward he continued working for Delta Airlines as an aircraft mechanic for over 30 years, with most of his career in Charlotte. Richard was preceded in death by his parents, Robert and Susie Speaks; sisters, Ruth Dugas, Laura Ashley, Ruby Matthews; and brothers, Edward Speaks and JR Speaks. Richard is survived by his loving bride of 56 years, Linda, of Mooresville; his eldest son, Greg, and wife, Melinda, of Lowell; grandchildren, Brittney, Justin and Gregory; great-grandchildren, Brody, Lola and Landon; son, Steve, and wife, Debby, of Mooresville; grandchildren, Sam and Mary; and dearly devoted daughter, Caryn, of the home. Richard was a loving and devoted husband, father, grandfather and great-grandfather and also devoted to his fur babies, Annie and Pepper. After retirement from Delta, Richard could be found fiddling in his garage, woodworking or just tinkering around. He also volunteered for Mount Mourne Volunteer Fire Department for 20 years and was assistant chief. He spent many nights fighting fire and fixing BBQ. Visitation for family and friends will be on Thursday, October 14, from 5-7 PM at Cavin-Cook Funeral Home. Services will be at 7:00 PM in the Chapel of Cavin-Cook Funeral Home with Rev. John Stevenson and Rev. John Duvall officiating. Burial will be on Friday, October 15, at 11:00 am at Mountlawn Memorial Park, 196 Fan Key Rd., N. Wilkesboro, NC. For those who are unable to attend the service, you may go to the following link for the live stream https://www.youtube.com/channel/UC864hAs96dTRLVVL1la0Qlw/videos?view=2&flow=list In lieu of flowers, the Speaks family is asking that donations be made to Richard's most loved causes, the Wounded Warrior Project, St. Jude, ASPCA and Hospice & Palliative Care of Iredell County. Cavin-Cook Funeral Home & Crematory, Mooresville, is serving the Speaks family. Condolences may be made to the family at www.cavin-cook.com.

Richard Ray Speaks, 81, passed away on Oct. 11, 2021 after an extended illness. Richard was born at home on Oct. 16, 1939, the second youngest of eight siblings, to Robert and Susie Speaks of West Jefferson. He graduated from Beaver Creek High... View Obituary & Service Information

The family of Richard Ray Speaks created this Life Tributes page to make it easy to share your memories.

Send flowers to the Speaks family.