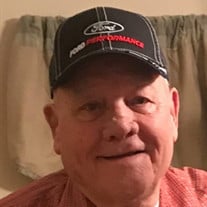 Raymond Floyd McIntosh, 83, of Mooresville, NC, passed away on Thursday, June 10, 2021, at his home. He was born September 2, 1937, in Cramerton, NC, to the late Henry Oliver McIntosh and Mabel Hager McIntosh. In addition to his parents, he is preceded in death by his wife, Shirley Clodfelter McIntosh and brothers, Robert McIntosh and Ruben McIntosh. Raymond attended North Mecklenburg High School. He worked for Transco as a Control Specialist for 34 years before his retirement. He enjoyed doing small engine repairs such as lawn mowers, chain saws, and weed eaters. His favorite past times were watching Nascar Racing, college football, westerns (especially Gunsmoke) and feeding and watching the birds. Raymond is survived by a son, James Derwin "Jimmy" McIntosh (Laurie); daughters, Teresa Rachelle Mabardy (Paul), of Tulsa, OK and Lisa M. Yost (Mike); a twin brother, Richard McIntosh of Statesville, NC; granddaughters, Anna Yost Craft (Cameron), McKenzie McIntosh Crippen (Clay) and Sarah Mabardy; great-grandson, Hudson Crippen, and another great-grandson due to arrive in late July. The family would like to send a special thanks for the compassionate love that he received from Jennifer, Bertie, Judy and Karen, his caregivers. Visitation for family and friends will be held on Monday, June 14, from 6:00-8:00 pm at the funeral home. Services will be on Tuesday, June 15, at 2:00 pm in the Heritage House at Cavin-Cook Funeral Home with Dr. Jerry Cloninger, Jr. and Rev. Eddie Hicks officiating. For those who are unable to attend the service, you may go to the following link for the live stream https://www.youtube.com/channel/UC864hAs96dTRLVVL1la0Qlw/videos?view=2&flow=list Burial will follow the service at Glenwood Memorial Park. In lieu of flowers, memorials may be made to First Baptist Church Sanctuary Fund, 150 S. Church St., Mooresville, NC 28115. Cavin-Cook Funeral Home and Crematory, Mooresville, is serving the McIntosh family. Condolences may be sent to the family at www.cavin-cook.com.

Raymond Floyd McIntosh, 83, of Mooresville, NC, passed away on Thursday, June 10, 2021, at his home. He was born September 2, 1937, in Cramerton, NC, to the late Henry Oliver McIntosh and Mabel Hager McIntosh. In addition to his parents, he... View Obituary & Service Information

The family of Raymond Floyd McIntosh created this Life Tributes page to make it easy to share your memories.

Raymond Floyd McIntosh, 83, of Mooresville, NC, passed away on...

Send flowers to the McIntosh family.