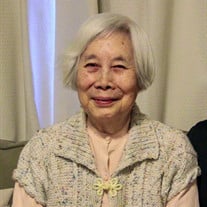 Pauline Y.S. Chen, age 96, passed away peacefully of natural causes on June 4, 2021, in Mooresville, North Carolina. She is preceded in death by her husband of 59 years: Dr. Leslie Hung Chen (1923 - 2006). Born in 1924 in Hangzhou, China, to a large and distinguished family (parents Ching Son Hsu and San Ju Jin), Pauline lived in many different parts of China, where she gained fluency in numerous dialects. She became one of the few women per class in China's elite engineering school, Jiaotong University in Shanghai. After surviving World War II in China, together with other Jiaotong students including her fiancé Leslie, she continued her college education in the U.S. They married in Newark, Delaware and started a family, beginning in Boston, South Bend, and St. Louis. They raised four children (Phyllis, Doreen, Bob, and Karen) living in East Lyme, Connecticut for 25 years. Pauline tutored and taught math on the side. She also actively and generously assisted students and immigrating families to adapt to life in the U.S. After all four children had left for college, Leslie and Pauline spent 23 years in Alexandria, Virginia. Part time Pauline taught math and Chinese in a private day school and did translation and language interpretation for several Washington, D.C. consulting firms. When fully retired, Pauline and Leslie moved to Aurora, Colorado. They traveled widely and to all continents, especially enjoying cruise ships. Due to Leslie's health issues, they moved to Hong Kong for several years. After he passed, Pauline returned to live in California, Connecticut, and then North Carolina. Pauline was smart, fearless, inquisitive, and had a strong sense of adventure. She loved her children and their families deeply. She encouraged and supported everyone in their endeavors, including pursuit of excellence in academics, STEM subjects, eclectic projects and skills, piano, Chinese language, and competitive swimming. She lived a rich, long life which tested her resilience, intellect, and ability to adapt. She was an avid reader, an expert contract and duplicate bridge player, and a Tai Chi and Qi Gong practitioner. She had a passion for knitting (intricate designs without using any patterns) for family members, friends, caregivers, and charities (premature babies, seniors, soldiers, veterans, etc.). Pauline is survived by 4 children - Phyllis Chen Moehle and spouse Richard of Centennial, CO; Doreen Chen Allen and spouse Charley of Pasadena, CA; Dr. Robert Steven Chen and spouse Meredith Golden of New City, NY; and Karen Chen DeMartine and spouse Mark of Mooresville, NC; by 6 grandchildren - Jacquelyn Moehle Honeyfield and spouse Jason, Laura Chen Allen, Bryce Golden-Chen, Kathryn Brownell Golden-Chen, Sarah Chen DeMartine, and Brendan Chen DeMartine; by great granddaughter Serena Mei Honeyfield; and by many siblings and nephews/nieces in the U.S., China, Hong Kong, Canada, and Australia. We all mourn her passing but also celebrate her amazing life and legacy. A celebration of Pauline's life will be held by her family at a future date. The family is very appreciative of the kind staff and hospice care at TerraBella Senior Living (formerly Atria Lake Norman). In lieu of flowers, please consider donations to the: Asian American Center at UNC-Chapel Hill: https://aac.unc.edu/about/ Condolences may be made to the family at https://www.cavin-cook.com

The family of Pauline YS Chen created this Life Tributes page to make it easy to share your memories.

Send flowers to the Chen family.