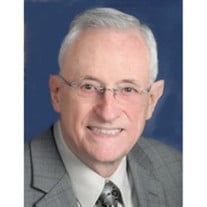 Paul Richard Morrow,Sr. ( December 05, 1932 - July 23, 2021 ) Paul Richard Morrow, Sr. of Weston, FL, formerly of Mooresville, NC, died July 23, 2021. He was the son of the late Paul Bennett Morrow and Crosby Marian Hager Morrow. He attended public schools in Mooresville, NC, and was a graduate of Davidson College, the College of William and Mary, and The American College. After a tour of duty in Korea, he returned to Mooresville, working with his father and uncle at Morrow Bros. Furniture and Appliances for five years. He commanded the local company of the NC Army National Guard before returning to active duty. He was an Army veteran of the Vietnam war, serving two one year tours, where he attained the rank of Major, and was awarded the Combat Infantryman's Badge, three Bronze Stars for Meritorious Achievement, and four Air Medals, among others. He was a Chartered Life Underwriter with Lincoln Financial Group, retiring after 25 years. He was a former member of the Mooresville, NC Jaycees, and was Past President of the Exchange Club of Hampton Roads, VA. He was a long-time member of St. Mark's United Methodist Church, Hampton, VA, where he sang in the choir, and, at the time of his death, he was a member of Plantation United Methodist Church, where he served on the Board of Trustees. He was a flutist; while a student at Davidson College, he played in the Charlotte Symphony Orchestra and the Charlotte Opera orchestra. Survivors include his wife of 61 years, Carole Turman Morrow; two sons, Paul Richard Morrow, Jr. and wife Brenda of Pawleys Island, SC and Mark Ansel Morrow, Sr. and wife Lisa of Davie, FL; four grandchildren; Mark, Jr. (MJ), Caraline, Crosby, and Carleigh; two step grandsons; Marsh and Taylor Deane, and a brother, Donald Hager Morrow of Raleigh, NC, as well as many nieces and nephews. A memorial service will be held at 2 PM, Saturday, August 28, 2021, at the Cavin-Cook Funeral Home Chapel, Mooresville, NC. Inurnment will follow at Glenwood Memorial Park, Mooresville, NC. The family will receive friends from 1 - 2 PM, prior to the service at the funeral home. For those who are unable to attend the service, you may go to the following link for the live stream https://www.youtube.com/channel/UC864hAs96dTRLVVL1la0Qlw/videos?view=2&flow=list Memorials may be made to Plantation United Methodist Church, 1001 NW 70th Ave., Plantation, FL 33313. Cavin-Cook Funeral Home, Mooresville, NC, is serving the family of Mr. Morrow. Condolences may be made to the family at www.cavin-cook.com.

The family of Paul Richard Morrow created this Life Tributes page to make it easy to share your memories.

Send flowers to the Morrow family.