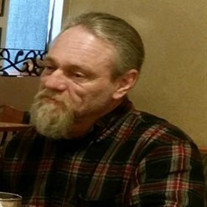 Max Allen Jackson, age 56, of Charlotte, passed away on Thursday, January 6, 2022. Became very ill unexpectedly following a short stay at Novant Heath Presbyterian, Charlotte. He was born on March 7, 1965 in Burke County, NC. Max was avid CB user "MOONSHINER" HAS ANSWERED HIS LAST RADIO CALL!! As Jesus has called him home to work on his radio in heaven. As he rides the sound waves to heaven calling all his CB's buddies for a radio check!! Come In! Max was very liked by many people as he worked on cars, built houses with his father for many years was excellent with trim work, worked on CB's and the antennas and always was fair to people and willing to help to everyone. In addition, has been a very dedicated caregiver and son for his mother for several years now the things he did not go unnoticed and will be great missed. Max and his brother Brian have a special bond as they always tried to help each other however they could. He loved his sister and made jokes about his hair was longer than hers all the time. He is survived by his mother, Laura Nell (Newsome) Jackson of Charlotte; brother, Brian Keith Jackson of Charlotte; sister, Shawnte Jackson Wyrick and her husband Raymond L. Wyrick; daughter, Mary E. Wyrick of Statesville; father, David Keith Jackson and his wife Kathy Todd Jackson of Huntersville and their sons Adam and Trevor Jackson. He was also survived by several cousins, aunts, and uncles that loved Max; and his extended CB family. He will be greatly missed. In lieu of flowers, memorials may be made to Cavin-Cook Funeral Home, PO Box 977, Mooresville, NC 28115 (704-664-3363) to help with funeral expenses. A service will be held at 2:00 PM on Saturday, January 15 at Sharon Memorial Park The Garden of Remembrance located in the courtyard in front of the mausoleum, 5716 Monroe Rd, Charlotte, NC 28212. Thanks to the Medics and Firefighter/EMT's and Novant Heath Presbyterian Hosp Charlotte for all the hard work talking care of our loved family member!!! Cavin-Cook Funeral Home & Crematory, Mooresville, is serving the Jackson family. Condolences may be made to the family at www.cavin-cook.com.

The family of Max Allen Jackson created this Life Tributes page to make it easy to share your memories.

Max Allen Jackson, age 56, of Charlotte, passed away on Thursday,...

Send flowers to the Jackson family.