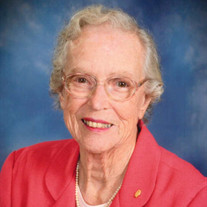 Laura Ann Turner Holdsclaw passed away March 2, 2022. She was born on July 14, 1934, in Youngstown, Ohio to Allen Hudson Turner and Lois Parks Turner. She was a 1952 graduate of Oakwood High School in Dayton, Ohio. She graduated from the University of Michigan in 1956 with a B.S. in Nursing. After graduation she spent two years in El Paso, Texas working at Newark Maternity Hospital as a nurse/missionary with the US2 program of the Methodist church. It was there that she met Clinton Holdsclaw, her husband of 37 years. After marrying in 1958 they settled in Mooresville, NC and raised three children. She worked for 24 years at Lowrance Hospital, teaching in their School of Nursing, and eventually becoming the director of the school. After the school closed, she continued working at the hospital until she quit working. She was a long-time member of Central United Methodist Church in Mooresville. Her faith was very important to her. She sang in the choir for nearly 60 years and served in various capacities in the United Methodist Women, as a Sunday School teacher and UMYF counselor. She was involved with missions and made 16 building team trips to Puerto Rico with the church. Over the years Laura and Clinton welcomed many international students into their home, including two that lived with them for a year. She was preceded in death by her parents, her husband Clinton, and her brother Richard Turner of Avon Lake, Ohio. She is survived by her children, Scott Holdsclaw (Hilda) of Raleigh, Terry Holdsclaw of Terrell, and Kathy Black (Craig) of Mooresville; by her three granddaughters, Beth Holdsclaw (Blake Hildebrand) of Raleigh, Abby Black and Maggie Black of Mooresville; by her brother-in-law, Billy Holdsclaw (Betty) and sisters-in-law, Dot Parker and Peggy Lutz; by numerous cousins, nieces and nephews; and by her AFS exchange student daughter Brigitte Scheuner (Marc) of Wabern, Switzerland. There will be a visitation Saturday, March 5 from 6-8 p.m. in the Central UMC sanctuary in Mooresville. A memorial service will be held Sunday, March 6, at 4:00 p.m. at Central UMC. Family will receive friends again following the service. Memorials may be made to the Central UMC Preschool, 214 North Academy St., Mooresville, NC 28115. Cavin-Cook Funeral Home and Crematory, Mooresville, is serving the Holdsclaw family. Condolences may be sent to the family at www.cavin-cook.com.

Laura Ann Turner Holdsclaw passed away March 2, 2022. She was born on July 14, 1934, in Youngstown, Ohio to Allen Hudson Turner and Lois Parks Turner. She was a 1952 graduate of Oakwood High School in Dayton, Ohio. She graduated from the University... View Obituary & Service Information

The family of Laura Turner Holdsclaw created this Life Tributes page to make it easy to share your memories.

Send flowers to the Holdsclaw family.