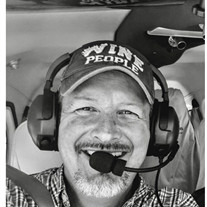 Kelly Scott Brady, August 12th, 1971 - May 22nd, 2022 Kelly Scott Brady, the beloved pilot, friend, family member and unrepentant jokester, died of a heart attack on May 22nd, 2022 at the age of 50. Kelly was born on August 12th, 1971 to Thomas and Marion Brady in Honeyoe, NY. The younger brother of Dean Brady, Kelly quickly developed a reputation as a big personality with a passion for living life to the fullest. In high school, he was well-known for taking part in a diverse selection of extracurricular: hockey, soccer, trombone, and musical theater, among other hobbies. Kelly adored being the center of attention, so his musical theater roles truly allowed his dramatic and humorous temperament to shine. He was nearly not cast in "The Diary of Anne Frank" because the director felt he was "too much of a cut-up", but Kelly managed to rein himself in for the production. To his compatriots in Honeyoe, his most famous role was when he starred as Danny Zuko in "Grease". However, his children never let him forget his turn as Buddy Hackett in "The Music Man". His big musical number in that show? "Shipoopi". After high school, Kelly attended The SUNY College at Brockport, where he earned a Bachelor's degree in Visual Arts. While he was well-known for being a clown, Kelly was also a diligent student who worked five jobs to pay for his degree. Once he graduated, Kelly worked as a cameraman for a local news channel in Rochester, NY. He also founded his own DJ business, Red Line Entertainment, with his friend Chris. In 1999, Chris invited Kelly to a Halloween party where he met his future wife, Tonnya Schoeck. She was dressed as a Roman goddess; Kelly, meanwhile, was always a character and therefore did not need a costume. They married in 2001 (or 2000 depending on which ceremony you count- he asked so many times that it only made sense for them to marry twice), but Kelly would refer to Tonnya as his "bride" for the entirety of their marriage. Their relationship gave Kelly the new challenge of helping to raise Tonnya's two daughters. Fortunately, Kelly believed in preparation and had been stockpiling dad jokes for years. Kelly and Tonnya went on to have two more children, making their family the modern Brady Bunch (except their seasons had fewer kids and no maid). Raising four children is difficult, but Kelly managed to be a great dad while working full-time and participating in a dizzying number of hobbies and charitable events. He was a fervent supporter of the Dream Factory, an excellent home chef, and the type of friend who would show up to teach you to hang drywall and somehow turn it into a party. After his family's move to North Carolina in 2014, Kelly developed a passionate interest in experimental aircraft and quickly dedicated himself to earning his pilot's license. Kelly was President of EAA Chapter 309 and spent a considerable amount of time mentoring with the Young Eagles Association, helping youth interested in aircraft learn to fly. Naturally, his last weekend on Earth was spent at a fly-in. Kelly was predeceased by his father, Thomas Brady. He is survived by his mother, Marion Brady; brother, Dean Brady (married to Sue Brady); and his wife of 21 years, Tonnya Brady; daughters Madeline and Danielle Schoeck of Albany, NY; Evan (son) and Shayla (daughter) Brady of Mooresville. A Celebration of Life service will be held by the family on Sunday, May 29th at 4 P.M. at the Lake Norman Airpark Montambo Hangar, 119 Airplane Court, Mooresville, NC 28117. In lieu of flowers, memorial donations may be made to https://www.eaa309.club/ to honor Kelly's lifelong commitment to charity and his passion for flight. The family appreciates everyone who has contacted them to share their memories and photographs of Kelly and encourages them to continue to do so. While Kelly's sudden passing has been unexpected and difficult, his family has been frequently struck by the sudden meaning of one of his worst (or best) and most infamous dad jokes. As a result, they would like to close this reflection on his life by inflicting it on anyone unfortunate enough to read to the end: Unlucky Dad Joke Participant: "What time is it?" Kelly, until the end: "The best time of your life, enjoy it."

The family of Kelly Scott Brady created this Life Tributes page to make it easy to share your memories.

Send flowers to the Brady family.