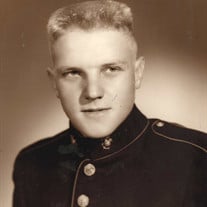 John Joseph Hollenback, 90, of Mooresville passed away peacefully holding hands with his wife Patricia and son John Jr. on April 4, 2022, due to complications of dementia. John was born February 28, 1932; in Dubuque, Iowa to Robert and Mary who preceded him in death. Along with his parents, son Daniel Lee of Warrenton, VA, sisters June (Art) Beier of Brookfield, WI, Virginia (Donald) Herbst of Dubuque, IA, brothers Andrew (June)of Farley, Iowa and Robert Jr.(Joan)of San Jose, CA, son-in-law Captain Stephen Riley, III, Ret USN of Mechanicsville, MD and daughter-in-law Timi Jo of Seal Rock, OR John is survived by his wife of 67 years, Patricia, of Bridgeport, Ne. Sons; John (Honcho) Jr of Mechanicsville, MD, Dennis (Butchie) and wife Tammie of Mustang, OK. Daughters; Sharon Kay Riley of Mechanicsville, MD, Patricia (Porky), husband Mickey Moffitt of Norfolk, Va., Carrie Jo and husband Steven Seaton of Glenn Dale, MD, Mary (Sugar) husband Ronnie Moore of Chesapeake Beach, MD, daughter-in-law Jane of Chesapeake, Va, brother Richard (Dick) wife Donna of Lehigh Acres, Fl and sister Ava Ferlmann of Peoria, IL., in-laws, LaDonna Loxterkamp, of Bridgeport, NE, Cecilia Sanchez, of Bagar's, NE, Leo (Carolyn) Gusman, of Bridgeport, NE, and Ronald (Janet) Gusman, of Bridgeport, NE, 22 grandchildren and 26 great grandchildren. John was born and raised in Dubuque, Iowa. John and his family were very close. They loved to play cards and Euchre was a family favorite. After high school John enlisted in the Marine Corps in 1951. He went to boot camp at Camp Pendleton, Ca. After losing a coin toss which was heads for east and tails for west. Well west it was and he was shipped out to Korea. He was in the communications unit as a cryptographer. With his security clearance and being in communications he was sent up to Pork Chop Hill to deliver the message that the war was over and to notify General Chester Puller. John was then shipped stateside to El Toro Marine Corps base in Santa Ana, Ca. He met and married the love of his life Patricia Gusman of Bridgeport, Nebraska on February 14, 1955. John was honorably discharged in April 1955. They went back to Dubuque, Iowa to start their life together. John worked for Dubuque TV and Cable Company and this started his career in the cable tv industry. John was a cable pioneer and after 50 plus years he retired. John was a member of the Knights of Columbus and American Legion, he was an active member of the VFW, and the Marine Corps League of Iredell County Detachment 1097, and was on the burial detail and helped with the Toy For Tots. He was elected the Marine Corps League's "Marine of the Year" for 2014 and 2018. John was a devout Catholic, Eucharist Minister and a member of St. Therese Catholic Church of Mooresville. John's family would like to thank the professionals of Right at Home and Autumn Care of Cornelius for their compassionate care of John. The viewing/prayers will begin at 10:00 am following with the Celebration of Life Mass at 11:00 am on May 6, 2022 at St. Therese Catholic Church in Mooresville, NC, Father Mark Lawlor will officiate the Mass. The broadcast can be accessed LIVE from this page on our website: https://www.sainttherese.net/mass-livestream John will be inured at Arlington National Cemetery at a later date. Following the Mass there will be a reception at the Heritage House, 494 E. Plaza Drive, Mooresville, NC. In lieu of flowers please consider donating in memory of John Hollenback to: Welcome Home Veterans at Richard's Coffee House, 165 N. Main Street, Mooresville, NC 28115, 704-663-0488; St. Therese Catholic Church, 217 Brawley School Road, Mooresville, NC 28117; The Marine Corp League Iredell County, Det. #1097, P.O. Box 727, Troutman, NC 28166.

John Joseph Hollenback, 90, of Mooresville passed away peacefully holding hands with his wife Patricia and son John Jr. on April 4, 2022, due to complications of dementia. John was born February 28, 1932; in Dubuque, Iowa to Robert and Mary... View Obituary & Service Information

The family of John Joseph Hollenback created this Life Tributes page to make it easy to share your memories.

Send flowers to the Hollenback family.