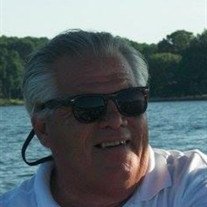 John Howard Dahl (Jack), 71, of Denver North Carolina, passed away on Sunday May 1st. He passed away in his sleep at home, after a year long battle with lung cancer. Jack served in the US Navy during the Vietnam War and later went on to serve the community as a police officer in Ellwood City Pennsylvania. In retirement, Jack began a custom millwork business which focused on serving the customers of 84 Lumber in Charlotte NC. His shop was his pride and joy and where he spent his time. Jack was a fun loving, comedic individual. He could make most people laugh with a quick joke and by simply being a fun guy to be around. He would swear that he never got into any trouble unless he was with either of his best friends Jack Main Sr., Alex Cessac or with his crew at Joey's in Denver. He was occasionally (wink), known to sip his favorite bourbon drink while celebrating the little wins of life as well as the victories of the Pittsburgh Steelers. Shortly after Jack moved to North Carolina in 2009, he rekindled a courtship with the love of his life, Suella Volpe. Together they built a beautiful home and life in Denver NC. The blended family became one, as the love for the children and grandchildren was so very evident by both of them. Jack was preceded in death by his parents Harry and Hazel Dahl, as well as his brother Henry Dahl, Daughter Lisa Jones and Grandson Danny Jones. He is survived by a large loving family, his sisters Debbie (John) Davenport and Sandra Oefinger, his brother Jeff (Esther) Landrum, and his beautiful wife Suella Volpe. Between Jack and Suella there are 4 children, Dan (Jennifer) Jones Dahl, David (Dana) Dahl, Skip (Erin) Volpe, and Cheri (Ed) Kaufman; 8 grandchildren, Ashley Hyatt, Addison Dahl, Ryan Dahl, Abbigail Dahl, Jillian Kaufman, Allison (Scott) Smith, Taylor (Royce) Deyber and Angela Volpe; and lastly his littlest fans, three beautiful great grandchildren, Nathan Jones, Ezra Hyatt and Brooklyn Deyber. The family will receive friends on Thursday, May 12 from 5:00-8:00 PM at Marshalls Funeral Home, Ellwood City, PA. Funeral services will be held at 11:00 AM on Friday, May 13 at Marshalls Funeral Home. Burial will follow the service at Locust Grove Cemetery, Ellwood City, PA. Following the committal service, a lunch reception will be at Sons of Italy, 808 Lawrence Ave, Ellwood City, PA. Also a celebration of life will be held in the Denver, NC area in the near future. In lieu of flowers, memorials may be made to VFW Post 6724, 8520 Mt. Holly Rd, Charlotte, NC 28214. Cavin-Cook Funeral Home & Crematory, Mooresville, NC, and Marshalls Funeral Home, Ellwood City, PA, are serving the Dahl family. Condolences may be made to the family at www.cavin-cook.com. "HOME TEAM"

John Howard Dahl (Jack), 71, of Denver North Carolina, passed away on Sunday May 1st. He passed away in his sleep at home, after a year long battle with lung cancer. Jack served in the US Navy during the Vietnam War and later went on to serve... View Obituary & Service Information

The family of John Howard Dahl created this Life Tributes page to make it easy to share your memories.

Send flowers to the Dahl family.