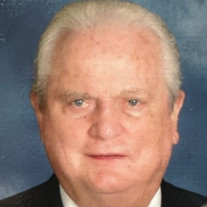 James Thomas "Tommy" Carroll, 81, went to be with his Lord and Savior on January 31, 2022 at home. He was born on January 4, 1941 in Charlotte, North Carolina to the late Robert and Mable Carroll. He is survived by his loving wife, Libby, of 61 years; daughters Elisa Dennehy (Robert) and Trina Garrett (Robert); grandchildren Emily Harland (Michael), Megan Daniel (Will), Caroline Dennehy, Morgan Garrett, Josh Garrett, Kelli Garrett, and great-grandson Micah James Harland; sister Anne Carroll Baird, sister-in-law Florence Carroll, and brother-in-law Carl Westbrook as well as many nieces and nephews; and his loyal dog Rascal. Tommy was preceded in death by his parents Robert and Mable Carroll, sister, Jacqueline Westbrook, and brother, David Carroll. Tommy was a loving husband, father, grandfather, son, brother, and friend to many. He was a real-life superhero. He was a beloved member of the last graduating class of Central High School in 1959. The friendships he developed during his time at Central continued with annual reunions and social gatherings. Tommy's father, Robert Carroll, founded Carroll Aligning Service in 1945. Tommy began working with his dad at the age of 15. Carroll Aligning rapidly became the premier auto repair business in the southeast. People came from all over to have vehicles serviced by Tommy and his loyal employees. He was a member of the Automotive Service Association and the Independent Garage Owners Association through which he received many hours of training. He was a master mechanic and received multiple awards for his accomplishments in the automotive and truck service industry. Tommy was on the advisory committee at Central Piedmont Community College and was instrumental in the development of the automotive technician program. He was a United States Army veteran who served his country from 1960-1966. He was awarded numerous drag-racing trophies, enjoyed fishing, hunting, and riding his Harley-Davidson. Tommy loved the Lord with all his heart and demonstrated this in the way he lived his life. The family will receive friends on Saturday, February 5, at Cavin-Cook Funeral Home, 494 E. Plaza Drive, Mooresville, NC from 5 pm - 8 pm. A celebration of life will be held on Sunday, February 6, at Rehobeth United Methodist Church, 9297 Sherrills Ford Road, Terrell, NC at 2 pm. For those who are unable to attend the service, you may go to the following link for the live stream https://view.oneroomstreaming.com/authorise.php?k=1644119174164937 Donations may be made to Rehobeth United Methodist Church Memorial Fund, P.O. Box 356, Terrell, NC 28682 or Pawsitively Pampered Pets Dog Rescue at www.pawsitivelypamperedpets.com/donations-page. Cavin-Cook Funeral Home, Mooresville, is serving the Carroll family. Condolences may be made to the family at www.cavin-cook.com.

James Thomas "Tommy" Carroll, 81, went to be with his Lord and Savior on January 31, 2022 at home. He was born on January 4, 1941 in Charlotte, North Carolina to the late Robert and Mable Carroll. He is survived by his loving wife, Libby, of... View Obituary & Service Information

The family of James Thomas Carroll created this Life Tributes page to make it easy to share your memories.

James Thomas &quot;Tommy&quot; Carroll, 81, went to be with his Lord and...

Send flowers to the Carroll family.