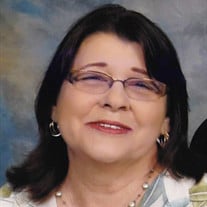 Jackie Burns Carr, 74, of Mooresville passed away on Thursday, March 3, 2022, at her home surrounded by her loving family. Jackie was born on July 24, 1947, in Greenville, SC to William Jack Burns and Ann Williams Burns. Jackie grew up in Mooresville and graduated from Mooresville High School in 1965. After high school Jackie attended Mitchell Community College. Jackie spent her young adult life as devoted mother to her two sons, Chuck and Chip Putnam. If you wanted to find Jackie during those years, you would have to look no further than a baseball game or a band performance. Jackie was a loyal wife to her best friend and soul mate Randy Carr. When Jackie married Randy on December 11, 1998, she became a bonus mom to Travis and Jamie, who she loved like her very own. Jackie and Randy loved their time spent together on Lake Norman, and traveling the United States in their RV. Jackie retired from General Microcircuits, Inc. in 2003. She enjoyed a long career with General Microcircuits but was happy to retire and become a full-time Memaw to her eight grandchildren Courtney, Laurel, Trey, Meggie, Peyton, Tanner, Samuel and Lorelei. Jackie also spent a lot of time during her retirement as a choir member at Bethel Presbyterian Church in Cornelius. In addition to her husband, children and grandchildren, Jackie is survived by her daughters-in-law, Shana Putnam and Lisa Putnam and her son-in-law Peter Knight. Jackie was an avid animal lover and is also survived by her beloved fur babies Belle, Precious and Bitsy. Jackie was preceded in death by her parents and also by her adored granddaughter Laurel. We know that Laurel welcomed her Memaw into heaven with her bright smile and they are celebrating being together again with craft time and tea parties. A graveside service will be held at 3:00 PM on Monday, March 7 at Glenwood Memorial Park with Pastor Scott Swix. In addition to flowers, memorials may also be made in Jackie's honor to the Lake Norman Humane Society at 2106 Charlotte Highway Mooresville, NC 28117. Cavin-Cook Funeral Home & Crematory, Mooresville, is serving the family of Mrs. Carr. Condolences may be made to the family at www.cavin-cook.com.

Jackie Burns Carr, 74, of Mooresville passed away on Thursday, March 3, 2022, at her home surrounded by her loving family. Jackie was born on July 24, 1947, in Greenville, SC to William Jack Burns and Ann Williams Burns. Jackie grew up in... View Obituary & Service Information

The family of Jackie Ann Carr created this Life Tributes page to make it easy to share your memories.

Jackie Burns Carr, 74, of Mooresville passed away on Thursday,...

Send flowers to the Carr family.