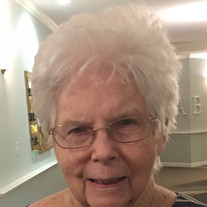 Eleanor Therese Glenn Pearson peacefully passed away January 13, 2022 at age 94. The children of Eleanor G. Pearson want to share their memories of their Mom's life. She was born on August 6, 1927 at Elizabeth Steel Magee Hospital, Pittsburgh PA, weighing 7lbs and baptized August 21, 1927 at St. Mary of the Mount Church, Pittsburgh PA. Mom was predeceased by her husband of 55 years, James Roussel Pearson, her parents William Benjamin Glenn and Eleanor Carroll Glenn and her brothers, Edward Glenn and William B. Glenn She is survived by four children, Mary Susan Coulter (William), Dennis Edward Pearson (Julia), Timothy James Pearson (Patricia) and Ann Louise Vano (Joseph). Mom was a kind, loving Grandmother to twelve grandchildren always being the adult that would get down on the floor and join in any games. Her grandchildren have grown into kind, loving adults following Mom's example and they are Michael Coulter, Kathryn Mitchell, Jessica Pacheco, Ann Whitney, Susan Pearson, Kirsten DeStefano, Brandon Arnold, Jamie Pearson, Casey Pearson, Joseph Vano, Therese Vano and Christopher Vano. Her legacy continues with eleven great grandchildren, Jack Coulter, Will Coulter, Elle Coulter, Clare Mitchell, Keller Fox, Morgan Pacheco, Piper DeStefano, Leighton DeStefano, Ella Whitney, Cameron Whitney and Baby Vano-Teague expected in August 2022. Mom attended Mt. Lebanon High School and prior to staying home to raise four children, Mom attended Robert Morris School of Business and Accounting and worked as the office manager for Pearson Equipment Company, founded by husband, Jim. When raising her children, Mom never missed a ball game, dance recital, band performance or music concert if one of her children was participating and to Mom, no one was ever better at any of these things than her children. She enjoyed hosting all holiday dinners and especially enjoyed the backyard cookouts. Mom loved kids, dogs, flowers and all things water (especially with her Navy veteran husband, Jim), including swimming in her backyard pool, sailing on the Chesapeake, cruising around the world and boating on the nearby lakes and Pittsburgh rivers. She was a graduate of the Annapolis Sailing School and a Commander in the Pittsburgh area United States Coast Guard Auxiliary. Mom volunteered at St. Clair Hospital and at St. Anne's Catholic Grade School. Mom's Catholic faith was an integral part of her life and on June 12, 2010 she became an Associate of the Sisters and Associates of Divine Providence, Marie de la Roche Province. A mass will be held at St. Paul of the Cross Parish-St. Anne's Church, Castle Shannon PA on Friday, April 22, 2022 at 11:30 am with a reception following the mass. The location will be announced at Mass. A brief service will be held at the chapel of Calvary Catholic Cemetery, Saturday, April 23rd, 2022, at 10:30 am. In lieu of flowers, please send prayers and/or donations to either: The Sisters of Divine Providence at cdpsisters.org/support or by mail at Sisters of Divine Providence, 9000 Babcock Blvd., Allison Park, PA 15101; or Hospice and Palliative Care of Iredell County at hoic.org/donate.asp or by phone 704-873-4719. Cavin-Cook Funeral Home, Mooresville is serving the Pearson family. Condolences may be made to the family at www.cavin-cook.com.

Eleanor Therese Glenn Pearson peacefully passed away January 13, 2022 at age 94. The children of Eleanor G. Pearson want to share their memories of their Mom's life. She was born on August 6, 1927 at Elizabeth Steel Magee Hospital, Pittsburgh... View Obituary & Service Information

The family of Eleanor Pearson created this Life Tributes page to make it easy to share your memories.

Send flowers to the Pearson family.