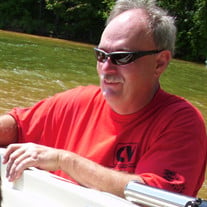 Delton "Del" Lyle Markle, 69, of Mooresville, North Carolina, passed away on March 3, 2022. He was born on November 14, 1952 in Detroit, MI to the late Lyle and Ann Carpentier Markle. Del enjoyed a career in racing which began over 50 years ago. Throughout his career, He was involved with several racing series, including NASCAR. Del got his start by building and testing cars with Oldsmobile and, later, took on the role of driver. After he and his family moved to North Carolina, he invested in the sport he loved and became a car owner. Over his career, Del held many land speed records, some of which still stand, and he earned several awards and titles. He leaves behind a positive mark in the sport of racing. Del's greatest role in life was one of Grandpa. He enjoyed his grandchildren and any time that he could spend with them. He played a very active part in their lives and was always ready to take them out on the boat around Lake Norman or driving the golf cart and acting as caddie for his grandson. His love for his family was very deep and he will be greatly missed by them and all that knew him. Del is survived by his wife, Suzanne Comai Markle; son, Rick Markle and his wife, Jennifer; and grandchildren, Zachary and Samantha Markle. A Celebration of Life will held from 6:00 PM - 6:45pm on Tuesday, March 15, 2022 in the Heritage House on the campus of Cavin-Cook Funeral Home & Crematory. A reception will be held immediately following. All who knew Del are invivted to attend. In lieu of flowers, memorial donations can be made in Del's memory to the Jeff Gordon's Children's Foundation, 1310 S. Tryon St., Suite 105, Charlotte, NC 28203, https://www.jeffgordonchildrensfoundation.org/ Cavin-Cook Funeral Home & Crematory, Mooresville, is serving the Markle family. Condolences may be made to the family at www.cavin-cook.com.

Delton "Del" Lyle Markle, 69, of Mooresville, North Carolina, passed away on March 3, 2022. He was born on November 14, 1952 in Detroit, MI to the late Lyle and Ann Carpentier Markle. Del enjoyed a career in racing which began over 50 years... View Obituary & Service Information

The family of Delton Lyle Markle created this Life Tributes page to make it easy to share your memories.

Send flowers to the Markle family.