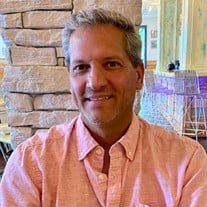 Christopher Scott Nowak (56) of Sherrills Ford, NC was called to Heaven by our Lord on Tuesday, September 21, 2021. Chris was born on December 18, 1964 in Buffalo, NY to Ronald Nowak (Martha) of Perrysburg, NY and Patricia Read (deceased). Chris attended Silver Creek Central High (class of 1983) and attended SUNY at Fredonia where he received his bachelor's degree. He was a graduate of The State University of New York at Buffalo with a Master of Science and went on to study for his Doctorate. An incredibly devoted husband, father, and brother, Chris is survived by his loving wife of 26 years, Cheryl Skalyo Nowak, and their two sons, Christopher Wallace Nowak (23) and Griffin Arleighton Nowak (19). He is also survived by his only sibling, Kim Fritschi (Gregory), Stepfather, James Read (Mary), Stepsister, Melissa Read, Father-in-law, Wallace Skalyo (Bonnie), Mother-in-law (Karen Skalyo), Sister-in-law, Kristin Whitford (Timothy), Brother-in-law, Wally Skalyo (Cynthia), Brother-in-law, Gary Skalyo and beloved aunts, uncles, cousins, nieces and nephews (Nowak, Zaprzal, LaPenna, Colosi, and Milazzo). Chris was Director of DevOps Advisory & Adoption for HCL America, and throughout his career held several leadership positions in software automation and engineering (First Union, Wachovia, Wells Fargo and Bank of America). Chris loved his job with HCL and was admired by his colleagues and work partners. Chris also served his country honorably for over a decade in the Army National Guard Aviation Division where he graduated from flight school and retired as a helicopter pilot and Army Captain. Chris and Cheryl built their forever home in Sherrills Ford, NC and moved there in October of 2020 from Huntersville, NC. Chris was an avid reader and life-long learner whose most enjoyable moments were spending time with family and friends, boating on Lake Norman, and staying informed on current events. An avid second amendment advocate, Chris inspired us with his passion, intellect and was a mentor and loyal friend to many. Chris touched the lives of everyone in his path; he will be remembered for his kindness, fortitude, integrity, and loving manner. Chris was very strong in his Catholic faith and he and his family were parishioners of St. Mark Catholic Church for over 15 years. A celebration of Chris' life will be held on Saturday, November 6th from 10:00 am - 1:00 pm at Hunter House and Gardens in Huntersville (412 S. Old Statesville Rd.). There will be a short service from 11:00-11:15, and tributes will follow. There will be refreshments. In lieu of flowers, the family requests donations be sent to Tunnel to Towers Foundation (t2t.org). Cavin-Cook Funeral Home & Crematory, Mooresville, is serving the Nowak family. Condolences may be made to the family at www.cavin-cook.com.

Christopher Scott Nowak (56) of Sherrills Ford, NC was called to Heaven by our Lord on Tuesday, September 21, 2021. Chris was born on December 18, 1964 in Buffalo, NY to Ronald Nowak (Martha) of Perrysburg, NY and Patricia Read (deceased).... View Obituary & Service Information

The family of Christopher Scott Nowak created this Life Tributes page to make it easy to share your memories.

Send flowers to the Nowak family.