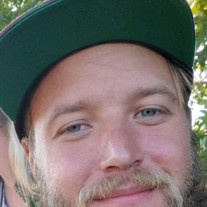 Christopher Andrew Arnold, "Doc", 25, of Mooresville, NC and formerly of Inver Grove Heights, MN, passed away in a vehicle accident Sunday, September 5, 2021. Born July 3, 1996, in St. Paul, MN, to Christine Beckers (LaVenture) and David Arnold. An Army veteran, he learned about service to community and country at a young age earning his Eagle Scout Award on February 18, 2014. Chris was a certified Paramedic and enlisted and was sworn into the U.S. Army on Patriot Day 2014, serving his country for 5 years. SPC Arnold was a Combat Medic with the 264th Engineering Clearing Company at Fort Bragg, NC. He was deployed to Afghanistan with the 264th from October 2018 to July 2019 and completed his military service in December of 2020. He then worked as a turf installer for Southeast Turf Artificial Grass Solutions in Mooresville, NC. Chris had a contagious smile, a kind heart and always reached out to help others. He lived life to the fullest, always giving 110% in everything he did. If he had a mantra it would have been "It's better to have a short life that is full of what you like doing than a long life spent in a miserable way." He had a passion for the outdoors and anything with an adrenaline rush, training with the 82nd Airborne, competing in Spartan races, and riding roller coasters or anything that went fast. He had a love for music and the comraderie of working out at the gym with his Army buddies, as well as; gaming, hunting, fishing, and spending time with family and friends. Chris was preceded in death by his grandfather Robert Arnold, grandmother Donna Beckers, great grandparents Mercedes and Vernon Wood; Rose and Homer LaVenture; Helen and Floyd Schaeffer and Ruth Belisle, and great uncle Harold Arnold. He is survived by his mother Christine Beckers (Mark); father David Arnold (Malinda); brothers Matthew Arnold (Chelsie Phillips); twin brother Nicholas Arnold (Anna Roseman); Jordan Beckers (Laurel DiSera); Christopher Beckers (Halie DeChaine); nephews Garrett and Wesley Arnold, niece Haidyn Arnold; uncle Tom LaVenture; grandparents David and Connie LaVenture; Peg Arnold; Joseph Beckers and his dogs Luna and Severus. We would like to give a special acknowledgement to the Roseman family; his best friend Malcolm (Tabatha) Bowers and to Scott (Marie) Marks for their outpouring of love and support. Chris' Celebration of Life will be held by the family on Saturday, October 23 from 1-4pm at Good Shepherd Lutheran Church (food will be served), 7600 Cahill Avenue, Inver Grove Heights, MN. The funeral will be at Fort Snelling National Cemetery on Wednesday, October 27 at 9am. In lieu of flowers, memorial donations to the 23rd Veteran "Give U.S. veterans a future of hope, opportunity, community, and inner peace", https://impact.23rdveteran.org/fundraiser/3438742.

The family of Christopher Andrew Arnold created this Life Tributes page to make it easy to share your memories.

Send flowers to the Arnold family.