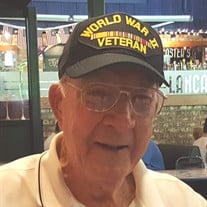 Retired TSgt William Lawton Volz, 97, passed away peacefully on Monday, March 8, 2021. He was born on September 3, 1923, in Philadelphia to the late William F. Volz and Anna M. Schucker. Growing up during the Great Depression, William was the oldest of five sons, all sharing one bedroom in his parents' home in downtown Philly. As a youngster, he often found creative ways to make a little extra money for his family, like buying fresh pretzels for 1 cent and selling them for 2 cents. William began serving his country as a teenager when he signed up to work in Arizona for the Civilian Conservation Corps. Most of what he earned was sent home to help his family. At 19, he decided to enlist in the Army Air Corps and was soon on his way to the South Pacific to serve his country in World War II. He often joked about all the islands he visited but never really got to enjoy. Bill spent 21 years in the military at posts around the US, Canada, and Iceland, including Aberdeen Proving Ground, Maryland and Labrador, Canada, before retiring from the Air Force in 1963. He then started a new career with NASA at Cape Canaveral and took pride in being part of the team that launched men and women into space. When NASA shut down, he worked at various other jobs in Florida before retiring for good to Myrtle Beach. Bill had a wicked sense of humor and enjoyed spending his days socializing with friends and neighbors. In late 2018 he moved to Mooresville, NC, to live with family. William is preceded in death by his first wife Madeline E. Rauch, his second wife Marilyn R. Hough, his granddaughter Amy (Sylwester) Gajek of Semmes, AL, his step-granddaughter Caroline Beason of Huntersville, NC, and his brothers George, Edward and Robert. He is survived by his twin daughters JoAnn Fredella and Joan King of Semmes, AL; his grandchildren Sr. Kelly Francis of Jackson, PA, Michael (Pamela) Fredella of Houston, Jill (David) Spicer of Madison, FL, and Rebecca (Tim) Witt of Melbourne, FL.; five great-grandchildren Kaylee, Matthew, Emily, Madison and Ryan; and his brother Ronald Volz of Philadelphia. He is also survived by his step-daughter Sherry (Walter) Klepfer of Mooresville, NC and his step-granddaughter Christina Cole of Annapolis, MD. Part of America's "Greatest Generation", William lived a full life dedicated to serving his country and to caring for his family. He will be laid to rest at Arlington National Cemetery with full military honors. A private graveside service will be held for the family. In lieu of flowers, memorials may be made to Levine & Dickson Hospice House - Huntersville NC (www.hpccr.org/giving) or your local Humane Society. Cavin-Cook Funeral Home & Crematory, Mooresville, NC, is serving the family.

Retired TSgt William Lawton Volz, 97, passed away peacefully on Monday, March 8, 2021. He was born on September 3, 1923, in Philadelphia to the late William F. Volz and Anna M. Schucker. Growing up during the Great Depression, William was... View Obituary & Service Information

The family of William Lawton Volz created this Life Tributes page to make it easy to share your memories.

Send flowers to the Volz family.