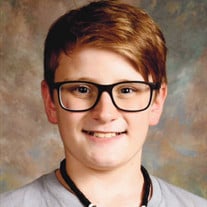 Talon Scott Dyson, 11, passed away doing what he loved in a tragic dirt bike accident on December 26, 2021, in Statesville, North Carolina. He was born May 5, 2010 to Timothy "Scott" Dyson and Amy Eades Dyson. Talon was a sixth grade student at Oakwood IB Middle School. He went to Triplett United Methodist Preschool when he was a toddler and still has special friends and bonds from the wonderful staff. He attended Rocky River until the family moved to Statesville in 2018. He was known for his love of eating anything sweet, and swimming with his cousins at his Mimi Peggy's house. He especially enjoyed playing soccer and was an excellent goalie. Talon was riding a bicycle at the age of 2 with no training wheels, and developed a love of dirt bikes soon after. He was happiest while riding his Yamaha dirt bikes and was never without all of his safety gear. Talon and his big brother, Landen were very close. They adored each other and Talon wanted to do everything his big brother did. They enjoyed doing all kinds of things together. Talon loved taking rides with his big brother in his car, especially to Cook Out where they enjoyed vanilla milkshakes together...another of his great loves. Talons big brother was also responsible for his love of Xbox. His best friend Caden and Talon spent hours playing Xbox and riding bikes, a nice combination of inside and outside fun. He and Caden also enjoyed vacations together, FaceTiming, and listening to music. Talon's Xbox and video game playing, was only allowed after his homework was complete, and was a great incentive for getting his school work done. Talon adored his family as much as we loved him. He was a true "Daddy's boy" who wanted to be right by his side working on cars, four wheelers, dirt bikes, tractors or learning about electrical projects around the house. He was a gentle and old soul, caring and sweet, adored by his family. We all had our special nicknames and he loved them all. He was his mommy's' "Sugarbug" and his daddy's "Bestest Bud" and his aunt Beth's, Mimi Sandy's, and Dad's "Li'l Man. Talon was a super smart, kind-hearted, happy child. Talon is survived by his parents, Amy Eades Dyson and Timothy Scott Dyson, both of Statesville; brother, Landen Chase Ensminger; sister, Taylor Dyson Hill (Alex); maternal grandparents, Peggy Holman Crump and Jimmy Eades (Janet); paternal grandparents, Larry Dyson (Doris) and Sandy Brooks (Steve); and his uncle Clay Dyson (Dana), special aunt Beth Dyson Webster (Johnny), and cousins Jeffrey Webster (Amy), Joey Webster, Brittany Dyson Bennett (Guy), Julia Webster and Jordan Webster. Aunts Mandy Eades Owens (Curtis), uncle, David Crump (Juanita) and Shelia Crump McClain. He also adored his cousins Chloe Leucht, Aubrey and Hunter Wilson, Nathan Robinson, Alisha Wilson. The family will receive friends on Wednesday, December 29, 2021, from 5:00 pm to 7:00 pm, at Cavin-Cook Funeral Home in Mooresville, North Carolina. The funeral service will be held on Thursday, December 30, 2021, at 11:00 am at First Baptist Church of Statesville, North Carolina, located at 815 Davie Avenue, Statesville, North Carolina. Immediately following the service, interment will be at New Union Methodist Church Cemetery, 1869 Sheffield Road, Mocksville, North Carolina. For those who are unable to attend the service, you may go to the following link for the live stream https://www.youtube.com/watch?v=b4EXPW0hLNM In lieu of flowers, memorial donations may be made to Dove House Children's Advocacy Center, 2407 Simonton Road, Statesville, North Carolina 28625. Cavin-Cook Funeral Home, Mooresville is serving the Dyson family. Condolences may be made to the family at www.cavin-cook.com.

Talon Scott Dyson, 11, passed away doing what he loved in a tragic dirt bike accident on December 26, 2021, in Statesville, North Carolina. He was born May 5, 2010 to Timothy "Scott" Dyson and Amy Eades Dyson. Talon was a sixth grade student... View Obituary & Service Information

The family of Talon Scott Dyson created this Life Tributes page to make it easy to share your memories.

Talon Scott Dyson, 11, passed away doing what he loved in a tragic...

Send flowers to the Dyson family.