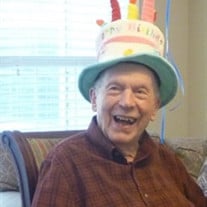 Sylvio Gene Beaulieu, 101, of Mooresville, North Carolina passed away on Thursday, August 5, 2021 at Summit Assisted Living. Sylvio was born May 15, 1920 in Soldier Pond, Maine to the late Honoré and Odile Pelletier Beaulieu. He moved from Manchester, CT to North Carolina in 2003 at the age of 82, after spending 46 years constantly improving the house, he and his wife, Doretta, lived in. Sylvio became a member of St. Therese Church in Mooresville. After the passing of Doretta, he remarried when he was 89 to Betty Hartman. Sylvio was a machinist and tool & die maker who enjoyed traveling, dancing, playing cards, fixing items, tinkering in his workshop, gardening and reading National Geographic. He was a Navy veteran of World War II. He is survived by his wife, Betty Beaulieu, a sister, Juliette Beaulieu, and his children, Donald Beaulieu of Charlotte, NC, Elouise Carlisle and her husband Russell of West Hartford, CT, Pauline Beaulieu of Ashland, OR, David Beaulieu and his wife, Vivian of Healdsburg, CA and Diana Highter and her husband Rick of Cornelius, NC; as well as grandchildren Brad, Tara, Alex, Eric, Anne Marie, Alana and Jake; and great-grandchildren Gabby, Aria, Amelia, Ainsley, Maya and Milo. He was predeceased by 5 brothers, Martin, Fred, Camille, Ross and Paul and by four sisters, Aurore Bouchard, Jeanne St. Amand, Maybelline Nadeau and Teresa Dubeˊ. The family would like to thank the wonderful staff at Summit Assisted Living for the loving care they provided Sylvio while he was there. A Mass of Christian Burial was held on August 13 at 9:00 am at St. Therese Catholic Church in Mooresville, followed by private burial at Glenwood Memorial Park. Memorials may be made to Carolina Caring, 3975 Robinson Road, Newton, Nc 28658 who provided his hospice care. Cavin-Cook Funeral Home & Crematory, Mooresville, is serving the Beaulieu family. Condolences may be made to the family at www.cavin-cook.com.

Sylvio Gene Beaulieu, 101, of Mooresville, North Carolina passed away on Thursday, August 5, 2021 at Summit Assisted Living. Sylvio was born May 15, 1920 in Soldier Pond, Maine to the late Honoré and Odile Pelletier Beaulieu. He moved from... View Obituary & Service Information

The family of Sylvio Gene Beaulieu created this Life Tributes page to make it easy to share your memories.

Send flowers to the Beaulieu family.