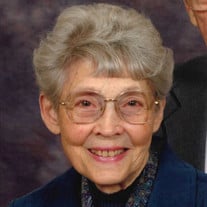 Sara "Tootsie" Davis Howard, 94, formally of Mooresville and North Wilkesboro, went to be with her Lord on Saturday, February 19, 2022. Sara was born in High Point, NC on October 27, 1927 to the late Roy Emerson and Sara Cooper Davis. She was a graduate of Mooresville High School in 1945. On February 3, 1946 she married William MacRae "Mac" Howard Sr. of Mooresville and they were blessed with 72 years together. Sara and Mac lived in many towns and made many friends along the way. They moved to High Point in 2013 where they spent their final years. Sara was a devoted wife, loving mother and "Mamaw." She enjoyed cooking and teaching her grandchildren and great-grandchildren how to make her famous "stickies." She loved sewing including a baptismal gown that several of the grandchildren wore, family trips to the beach and writing stories and poems of which some were published. Sara was a member of the Writers Guild of America and the local community theatre in North Wilkesboro. She enjoyed sending cards, notes and letters to family and friends. Sara was very involved in many activities including teaching Sunday school, singing in the choir and holding many positions in the churches they attended. Sara was preceded in death by her late husband Mac, her sister Merle Deaton and her brother Claude Davis. She is survived by her daughter Susan and husband Mickey of High Point, son Bill and wife Glenda of Mooresville and son David and wife Catherine of Atlanta, Ga.; five grandchildren, Mike Fox (Kristi) of Salt Lake City, Utah, Shannon Hancock (Tod) of Kernersville, Leigh Ann Critcher (Shannon) of Millers Creek, Sherri Stabel (Jason) of Mooresville and Alexandra Howard of Atlanta, Ga.; ten great-grandchildren, MacKenzie Fox, Tyler and Austin Hancock, Brandon and Britt Tart, Braxton Critcher (Kandace), Bethany Powell (Dylan), Sydni and Josiah Critcher and Sammy Stabel. The family wishes to express their gratitude to Sara's caregivers Arianah Allen and Shirley Covington and to the staff of Hospice of the Piedmont for their caring spirit. Visitation will be at 2:00 pm Saturday, March 5 followed by the memorial service at 3:00 pm. The service will be held at Cavin-Cook Funeral Home and Crematory Chapel, Mooresville, NC, and the interment will follow at Triplett United Methodist Church Cemetery in Mooresville. Mask optional. In lieu of flowers, memorials may be sent to Hospice Home of the Piedmont, 1803 Westchester Drive, High Point, NC 27262 or the Alzheimer's Association, 3800 Shamrock Dr. Charlotte, NC 28215. Cavin-Cook Funeral Home and Crematory of Mooresville is serving the family. Condolences may be made to the family at www.cavin-cook.com.

Sara "Tootsie" Davis Howard, 94, formally of Mooresville and North Wilkesboro, went to be with her Lord on Saturday, February 19, 2022. Sara was born in High Point, NC on October 27, 1927 to the late Roy Emerson and Sara Cooper Davis. She... View Obituary & Service Information

The family of Sara Davis Howard created this Life Tributes page to make it easy to share your memories.

Send flowers to the Howard family.