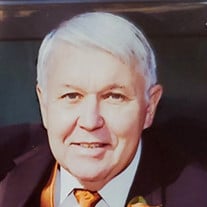 Samuel Alexander Beam, Jr. "Alex," went to his eternal home with his Heavenly Father and Savior, Jesus Christ, on July 15, 2021, after battling a long illness. He was surrounded by his adoring family. Alex was born in Iredell County on February... View Obituary & Service Information

The family of Samuel Alexander Beam, Jr. created this Life Tributes page to make it easy to share your memories.

Send flowers to the Beam family.