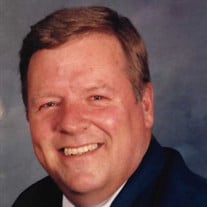 Richard William Apgar, Sr. age 76, died in his Mooresville, North Carolina home on November 22, 2021 to be with the Lord. Rich was born in Fairfax County, Virginia on February 10, 1945, the son of Herbert and Aileen Apgar, and grew up in Clifton, Virginia. He met and married Betty Timmons, his wife of 40 years, while a college student in Milledgeville, GA. He began a 25-year career with Eastern Airlines in northern Virginia, followed up with 15 years in the real estate market. Rich was very involved in his community throughout his life, serving in various roles at St. Mark's Lutheran Church and Fairview United Methodist. He enjoyed volunteering as a soccer coach in Iredell County, and his early efforts helped to get soccer established in the county. He loved hunting and fishing and helping others in the neighborhood. He was truly a good Samaritan to anyone in need. He could fix anything and was always happy to help others! Rich is predeceased by his parents and his first wife. He is survived by his current wife of 11 years, Brenda Napier Apgar. He is also survived by his children, Richard William Apgar, Jr. (Sarah) of Jefferson, North Carolina, daughter Cathy Cocolas (Anthony) of Mt. Pleasant, South Carolina, Dr. Mark Stephen Apgar (Sylvia) of Denver, North Carolina and stepchildren Tony Napier and Abbey Napier of Mooresville. His grandchildren include Abigail Grace Apgar, Alexis Catherine Cocolas, Samuel Anthony Cocolas, Marcus Russell Apgar, Annabelle Elizabeth Apgar, Georgia Joan Apgar, Jack Timmons Apgar, and Ford Thomas Apgar. Rich was a huge animal lover, and his pets brought him tremendous joy. In lieu of flowers donations in his memory can be made to the Carolina Raptor Center, 6000 Sample Rd, Huntersville, NC 28078 or Lake Norman Humane Society 2106 Charlotte Hwy, Mooresville, NC 28117. Cavin-Cook Funeral Home & Crematory, Mooresville, is serving the Apgar family. Condolences may be made to the family at www.cavin-cook.com.

Richard William Apgar, Sr. age 76, died in his Mooresville, North Carolina home on November 22, 2021 to be with the Lord. Rich was born in Fairfax County, Virginia on February 10, 1945, the son of Herbert and Aileen Apgar, and grew up in Clifton,... View Obituary & Service Information

The family of Richard William Apgar, Sr. created this Life Tributes page to make it easy to share your memories.

Send flowers to the Apgar family.