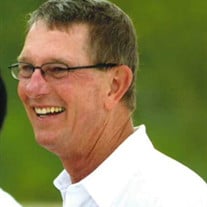 Randolph "Randy" Jefferson Lambeth, 66, of Mooresville, passed away at home on Wednesday, April 7, 2021 of complications from Parkinson's disease. He was born on June 18, 1954 to Joseph P. Lambeth and Panthea Huffines Lambeth at Wesley Long Hospital in Greensboro, NC. Randy graduated from Page High School in 1972, and the University of North Carolina Chapel Hill. He also received his master's degree in business administration from Southern Illinois University in Edwardsville, IL. Randy married Kimberly Gober Lambeth on February 4, 1978. They are the proud parents of daughter, Rachel Marlowe and her husband, Lane; and a precious granddaughter, Madison, who loved her "Pawpaw". Randy began a long successful career in sales beginning with Wrangler Corp. in Greensboro. He and Kim moved to numerous locations in his career and made friends every where they went. He retired from Hanes Corporation in 2007 to start a new adventure as the owner of three Martinizing dry cleaning stores in the Lake Norman area. This allowed him and Kim to spend more time doing their favorite pastime of traveling to wonderful vacation spots. In addition to his career, Randy was a third-degree mason in the Mount Moriah Lodge #690 of Statesville. He was a big supporter of the Big Brothers/Big Sisters organization, both as a big brother and as a board member of the Winston-Salem Chapter. In addition to his parents, he was preceded in death by his sister, Judy Lambeth; and his brother, Joe Lambeth. He is survived by his wife, Kim; daughter and son-in-law, Rachel and Lane Marlowe; granddaughter, Madison Marlowe; brother, Rick Lambeth and wife, Betty; sister-in-law, Debbie Lambeth; and brother-in-law, Mark Gober. He is also survived by several loving uncles, aunts, and cousins who were great comfort in recent years. Due to COVID-19 a celebration of life will be held at a later date. In lieu of flowers, memorials may be made to Hospice & Palliative Care of Iredell County, 2347 Simonton Rd, Statesville, NC 28625. The family would like to thank all the hospice staff and other care givers for their loving care. Cavin-Cook Funeral Home & Crematory, Mooresville, is serving the Lambeth family. Condolences may be made to the family at www.cavin-cook.com.

Randolph "Randy" Jefferson Lambeth, 66, of Mooresville, passed away at home on Wednesday, April 7, 2021 of complications from Parkinson's disease. He was born on June 18, 1954 to Joseph P. Lambeth and Panthea Huffines Lambeth at Wesley Long... View Obituary & Service Information

The family of Randolph Jefferson Lambeth created this Life Tributes page to make it easy to share your memories.

Send flowers to the Lambeth family.