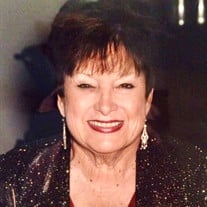 Patricia Edwards, 79, beloved Mother, Grandmother, and friend, was called to her eternal resting place on July 21, 2021. She entered this world on August 3, 1941, in Mooresville, NC, born to Paul and Ruby Lambert. After graduating from Mooresville High School in 1959, Pat attended Kings College in Charlotte. Patricia loved spending time with her children and grandchildren, whom she considered her greatest blessings. She was know by many names, Ms Pat, Mom, Mumsi, and Dummies. Whichever name you knew her by, you knew you were going to have a fun time with her quick wit and infectious laugh. She could often be found cooking up some of her famous goodies, like Goo Cake and Sausage Balls, or out to eat breakfast with her family, or on one of her many adventures with her "Golden Girls" where they had marathon card games. Patricia love reading and could often be found in What-a-Burger parking lot where she would eat and read. She is survived by her children, son Mark Edwards; son Scott Edwards (Dana); daughter Lori Broome, and her grandchildren, Jessi Taylor (Dalton); Shane Taylor (Kaylyn); and Karley Dominick (Matt); Courtney Gaultney (David); Cory Gaultney; and Cooper Gaultney. She also had 2 great-granddaughters, Alice and Raelyn. Patricia was preceded in death by her parents, Paul and Ruby Lambert; her brother, Donald Lambert; and son-in-law, Johnny Broome. Patricia's family will receive friends at Cavin-Cook Funeral Home on Monday, July 26, 2021, from 5:30 pm - 7:00 pm with a service following in the Cavin-Cook Funeral Home Chapel. For those who are unable to attend the service, you may go to the following link for the live stream https://www.youtube.com/channel/UC864hAs96dTRLVVL1la0Qlw/videos?view=2&flow=list Patricia's internment will be at Berea Baptist Church Cemetery, with her parents, following a private graveside service with her family. Cavin-Cook Funeral Home, Mooresville, is serving the family of Mrs. Edwards. Condolences may be sent to the Edwards family at www.cavin-cook.com.

Patricia Edwards, 79, beloved Mother, Grandmother, and friend, was called to her eternal resting place on July 21, 2021. She entered this world on August 3, 1941, in Mooresville, NC, born to Paul and Ruby Lambert. After graduating from Mooresville... View Obituary & Service Information

The family of Patricia Lucille Edwards created this Life Tributes page to make it easy to share your memories.

Send flowers to the Edwards family.