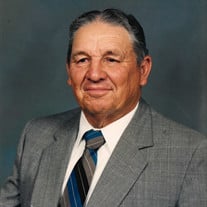 Parks Sloan Cornelius, 95, of Mooresville, NC, passed away on Saturday, February 19, 2022 at the S. Mitchell Mack Hospice House, Mooresville. From an early age, Parks Cornelius discovered the value of hard work and helping others, and those traits have been a part of his character all throughout his life. Born Jan. 15, 1927 to Addie and Sell Cornelius, Parks was one of three children having a brother Samuel Cornelius and sister, Katherine Sloop. Raised on a farm, Parks learned early about farming, and when his father passed away at an early age, he helped work the farm. Raising cotton, he would help pick it and load it in the wagon and then take it the cotton gin. Parks wasn't a stranger to serving as he served in the United States Army in the 1950's, stationed in various places including Hawaii and Missouri. He was discharged early to once again help his family. Throughout the years, he has, in addition to farming, worked for the local milk company delivering milk, as a security guard at Draymore Manufacturing Company, and he helped to develop the Camino Real Road area where the family home still remains. Family and friends were important to Parks as could be seen from the care he took of his mother while she was sick, as well as helping all his neighbors do work with his tractor. As a result, his friends started calling him the John Deere Man. Parks could also be seen volunteering in the community as he participated in delivering meals as part of the Meals on Wheels program for 20 years. He served in this capacity until he was 89-years-old. His knowledge of farming continued through the years as he raised a huge garden, and as she was able, his mom would freeze and can lots of produce from it. Known for his damson trees, Parks gave many away. When everyone started to want the damsons, he later began selling the fruit. Raising chinchillas and enjoying his CB radio are several other things that Parks had been involved with during his lifetime along with spending time with friends. In the early mornings, he could be found at McDonalds with a group of about six friends as they spent time visiting and as long as it was open, you could find him in the evenings at Fat Boys with other friends. It was noted that he still has friends that he met in Missouri from his military days that he keeps up with. The family will receive friends on Saturday, February 26 from 1:00-2:00 PM with a service following at 2:00 PM at Fair View United Methodist Church with Rev. David Christie officiating. Burial with military honors will follow the service in the church cemetery. In lieu of flowers, memorials may be made to S. Mitchell Mack Hospice House, 1325 Mecklenburg Hwy, Mooresville, NC 28117 or Fair View UMC, PO Box 27, Mt. Mourne, NC 28123. Cavin-Cook Funeral Home & Crematory, Mooresville, is serving the family of Mr. Cornelius. Condolences may be made to the family at www.cavin-cook.com.

Parks Sloan Cornelius, 95, of Mooresville, NC, passed away on Saturday, February 19, 2022 at the S. Mitchell Mack Hospice House, Mooresville. From an early age, Parks Cornelius discovered the value of hard work and helping others, and those... View Obituary & Service Information

The family of Parks Sloan Cornelius created this Life Tributes page to make it easy to share your memories.

Parks Sloan Cornelius, 95, of Mooresville, NC, passed away on...

Send flowers to the Cornelius family.