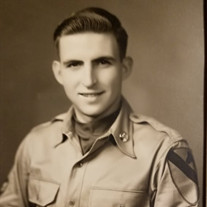 October 19, 1934 - July 28, 2021 This is the story of Millard Charles Wood "Sal". Millard was a wonderful man that was loved, is missed, and will always be cherished. Millard's story starts on October 19, 1934, when he came into this world in Cicero New York. He was born to 2 loving and hardworking parents Clarence and Ella Wood. He grew up on Railroad St as he stated on the "other side of the tracks" in Brewerton (The armpit of the earth) NY. He was the middle child with 2 siblings Kenny oldest and Nancy youngest. As a child and then teen, he loved spending his time with his siblings especially Nancy who he felt a need to always take care of and protect. He also enjoyed playing sports, swimming, driving fast cars and chasing even faster women. He attended State University of New York "SUNY" at Morrisville where he obtained an Associate's degree in Applied Science majoring in Automotive Technology After graduation in 1954 he joined the Army became a Wheeled Vehicle Mechanic and was shipped off to Sendai, Japan during the Korean War. He parted ways in 1974 with the military after 20 years of service ranking up to Sergeant in the Air National Guard and Reserve of the United States Air Force. He had a passion for patriotism and was a proud American for the rest of his days. In his late 20's he met Susan Gridley, a stunningly beautiful, funny and intelligent woman and knew that he had finally met his match when she slid up next to him that night in the car. They fell madly in love and never looked back. Within 3 years they had started a family, complete with sons Michael Randolph Wood followed 2 years later by Peter William Wood. As a family they loved spending time camping at Southwick state park, Selkirk state park, Rainbow shores and a lot of other places. He taught his 2 boys to swim and fish. Being a strong and hardworking father was of the utmost importance to Millard and he certainly did not disappoint when it came to wholeheartedly loving his family. He also loved being a grandparent (Pap) to his beautiful grandchildren, telling them unforgettable stories, teaching them to fish and making them his amazing blueberry pancakes. Millard is survived by his son's Michael and wife Wanda, Peter and wife Robin, Grandchildren Ryan and wife Cheryle, Shannon, Christopher and wife Samantha, Alexandria and Husband Skylar, Gabriel, Devin and wife Peighton, Kahlan and husband Carlos, Jaiden, Nathan and Ashley. Great Grand Children Landon, Christopher, Claire, Cameron, Colton, Sawyer, Mateo and Price. Sister Nancy and husband Neal Scott of Arizona and many Nieces and Nephews. He was preceded in passing by his loving wife Susan Carol Wood, brother Kenneth Wood and his parents Clarence and Ella. The family is at peace knowing Millard is finally back where he's missed every single day for the last 10 years... back in the arms of the love of his life; Susan. Whom he had been married to for 49 years before her passing in 2011.Telling her all about each and every one of the kids, grandkids and great grandkids and he couldn't wait to tell her all the stories she had missed. "It's A Wood Thing" There are no funeral services in lieu there will be a celebration of life by family as per his wishes.

October 19, 1934 - July 28, 2021 This is the story of Millard Charles Wood "Sal". Millard was a wonderful man that was loved, is missed, and will always be cherished. Millard's story starts on October 19, 1934, when he came into this world... View Obituary & Service Information

The family of Millard Charles Wood created this Life Tributes page to make it easy to share your memories.

This is the story of Millard...

Send flowers to the Wood family.