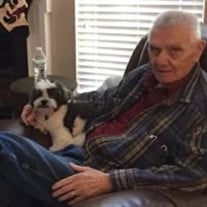 Michael Albert Canny, 86, of Mooresville, North Carolina, passed away on October 7, 2021. He was born on July 20, 1935 in Queens, NY to the late David and Elizabeth Brinkman Canny. Mr. Canny proudly served his country in the United States Air Force. Michael was a family-man and he always enjoyed any time he could spend with them, especially his great-grandchildren. He loved Little Debbie cakes and always had a cabinet full. He was always a happy man who loved making people laugh. He loved to use Messenger to stay in touch with family and friends. He was a faithful church member at Bethel Chapel in Harpersville, NY, enjoyed men's bible studies and served as a deacon over the years. In addition to his parents, Michael was preceded in death by his wife, Alison Kennedy Canny; and brother, David Canny. He is survived by his children, Michael Canny (Lori), Alison Burke (Gary), Diane Conklin (Ben), and Richard Canny; grandchildren, Mariah Canny, Kristin Caracciolo (Matt), Joshua Burke, Benjamin Conklin (Alicia), Ryan Conklin (Ericka), Elizabeth Conklin; great-grandchildren, Aiden Caracciolo, Zachary, Madison, Benjamin and Jax Conklin; brother, Donald Canny (Josephine) and numerous nieces and nephews. A graveside service will be held on Tuesday, October 19, 2021 at 1:00pm at Salisbury National Cemetery, Salisbury, NC. For those who are unable to attend the graveside, you may go to the following link for the live stream https://www.facebook.com/CavinCookFuneralHomeServices/ In lieu of flowers, memorial contributions can be made to American Lung Association, National Direct Response Headquarters, PO Box 756, Osceola WI 54020-0756. Cavin-Cook Funeral Home & Crematory, Mooresville, is serving the Canny family. Condolences may be made to the family at www.cavin-cook.com.

Michael Albert Canny, 86, of Mooresville, North Carolina, passed away on October 7, 2021. He was born on July 20, 1935 in Queens, NY to the late David and Elizabeth Brinkman Canny. Mr. Canny proudly served his country in the United States... View Obituary & Service Information

The family of Michael Albert Canny created this Life Tributes page to make it easy to share your memories.

Send flowers to the Canny family.