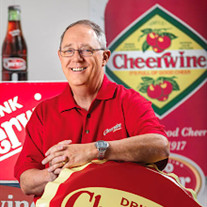 The next time you're deciding what to drink at the gas station, restaurant, or grocery store; think of Mark W. Ridenhour and consider a Cheerwine. Legend has it, Mark's mother, Evelyn Ridenhour used to put Cheerwine in his baby bottle which might be the reason why he led a life "Full of Good Cheer." Mark entered eternal life on December 17, 2021, but his legacy lives on. He is survived by his wife and soulmate, Cindy Ridenhour; his favorite oldest son Jason (wife Becca, children Henry and Kennedy) and favorite youngest son, Michael; siblings Sharon, Joel, Steve, and Crystal; and many in-laws, nieces, nephews, friends and family too numerous to list but not forgotten. If you were to search for "Dad Jokes" on the Internet, Mark said them all. And more. You'd be hard pressed to be around him for more than 15 minutes and not laugh at one of his jokes, gags, or silly humor. That was one of the many reasons why he left everyone with a smile on their face. Known for his extraordinary culinary skills, Mark made countless and extravagant wedding and birthday cakes for his family and was the heart of every catering event for St. Mark's Lutheran - his home Church, family and friends. His creativity oozed into all aspects of his life and the many projects he loved building. Whether it was figuring out how to automatically keep his well water from freezing during the winter months or building a zip-line for his kids, Mark's ability to create something from nothing was awe-inspiring. But his greatest creations and source of pride were his kids. He loved Jason and Michael so much and went to great lengths to ensure they never went hungry, always got to their sports practices and games, kept up with their schooling and became successful men in life. And he did that all as a single dad. Mark didn't have many rules for his boys but he did have one; Don't be stupid. • Thinking about quitting the basketball team just because you didn't get much playing time 1 game? Don't be stupid. You've got more talent and a lot left of a career than that. You'll earn your time. • Thinking about holding a firecracker in your hand longer than your friend can? Ehhh. Don't be stupid. You could lose some fingers. • Oh some guy just cut you off on the interstate? I should speed up, flip him off and show him who's boss!! Nope. Don't be stupid. That could get your car wrecked. • Thinking about driving home after drinking a couple of tall beers at the Panthers game? Nope. Don't be stupid. Just get an Uber. From our perspective, Mark died way too young. But as you look back on his 60 years of life, you realize - he won the game of life. He found a career designing school cafeterias and campuses that leveraged his creative mind to ensure all students left happy and with full bellies. He found the love of his life with Cindy. He raised two boys that became strong, hard-working men. And left a mountain full of wonderful memories for us to enjoy for eternity. He truly lived Cheerwine's famous saying, a life full of good cheer. A memorial service for Mark will take place in the Spring or Summer of 2022. Email [email protected] for more details. In lieu of flowers, please consider a donation to Lutheran Services Carolinas Senior Services 1416 S Martin Luther King Jr Ave Salisbury NC 28144.

The next time you're deciding what to drink at the gas station, restaurant, or grocery store; think of Mark W. Ridenhour and consider a Cheerwine. Legend has it, Mark's mother, Evelyn Ridenhour used to put Cheerwine in his baby bottle which... View Obituary & Service Information

The family of Mark Wayne Ridenhour created this Life Tributes page to make it easy to share your memories.

The next time you&#39;re deciding what to drink at the gas station,...

Send flowers to the Ridenhour family.