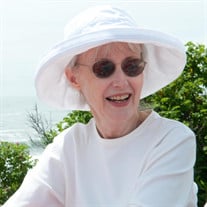 Marion (Kimball) Guth, age 83, was born January 27, 1938 and passed away April 29, 2021. Marion was born in Bangor, Maine, and spent most of her childhood living in Bucksport, Maine with her parents, Arthur and Edith (Pierce) Kimball, and her sister, Elaine. The family moved to Mt. Lebanon, Pennsylvania, and then to Madison, New Jersey where Marion graduated from Madison High School in 1955. She attended Colby College in Waterville, Maine, where she was a member of Phi Beta Kappa, and graduated Summa cum laude with a BA in mathematics. Marion met the love of her life, Frank Guth, at an Outing Club spaghetti social at the beginning of her freshman year at Colby, and they married a few weeks after she graduated in 1959. Because of Frank's occupation, Marion and Frank moved nine times in 22 years, and in between moves, Marion enjoyed baking, sewing, and needle arts, and dabbled in oil painting. For years, she volunteered her time as a Sunday School teacher, Girl Scout troop leader for both of her daughters, and as a Den Mother for her son's Cub Scout troop. In the late 1970s, Marion began working as a tax preparer for H&R Block, and became manager of the Hightstown, NJ H&R Block office. Retirement took Marion and Frank to Beaufort, South Carolina, where Marion became a small business owner as partner in the Beaufort H&R Block office. Frank and Marion later relocated to Brighton, Michigan, where they helped take care of their two youngest grandchildren before permanently retiring in Mooresville, North Carolina. Marion enjoyed visiting Maine every summer where she indulged in lobster, ice cream, and playing Yahtzee with her family. Marion is survived by her husband of nearly 62 years, Frank Guth, her three children Robin Holsonback, Robert (Sherry) Guth, and Karen Guth. She is also survived by her five grandchildren who she dearly loved, Stephanie (Matt) Lindsey, Alex Guth, Katherine (Elijah) Purcell, Emma Kosht, and Jane Kosht, and one great-grandchild, Kolby Lindsey. A memorial service will be held at 10:00AM on Monday, May 3, 2021 at Church of the Good Shepherd, 18745 West Catawba Avenue, Cornelius, NC. An additional service and interment will be held at the Parish Church of St. Helena, Beaufort, SC at a later date. In lieu of flowers, donations may be made to the Alzheimer's Foundation of America or to Hospice & Palliative Care of Iredell County. Cavin-Cook Funeral Home & Crematory, Mooresville, is serving the Guth family. Condolences may be made to the family at www.cavin-cook.com.

Marion (Kimball) Guth, age 83, was born January 27, 1938 and passed away April 29, 2021. Marion was born in Bangor, Maine, and spent most of her childhood living in Bucksport, Maine with her parents, Arthur and Edith (Pierce) Kimball, and her... View Obituary & Service Information

The family of Marion Guth created this Life Tributes page to make it easy to share your memories.

Send flowers to the Guth family.