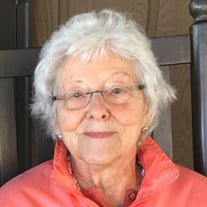 Marian Sprague Harkness, age 97, died on February 10, 2021 at The Pines at Davidson, Davidson, NC where she had resided since 2013. She was born in Salamanca, NY on August 15, 1923. Education was highly valued in her family and when she graduated from high school at seventeen, they supported her decision to attend Duke University. She graduated in 1945 with an A B degree, majoring in Spanish. It was at Duke that she met her future husband, Richard Harkness, who coincidently was also from a small town in western New York, only 25 miles from Marian's hometown. They married in December 1945 and after a brief honeymoon in Buffalo, Marian resumed work at Guaranty National Bank, NYC while Dick completed his naval commission on the USS Missouri. Shortly thereafter they moved to Troy, NY where Dick completed his engineering degree at Rensselaer Polytechnic Institute.  Marian and Dick moved to Charlotte in 1956 and quickly became engaged in their new community. They were founding members of Trinity Presbyterian Church (1956) and Marian served as Board member of the Steering Committee, President of the Woman of the Church (1969-70) and Church Librarian (1976-1982). Marian's spiritual growth and religious compassion led her to study and become commissioned as a Stephen Minister in 1995.  Marian relished her role as mother to her three children, Holly, Robert and Larry, guiding them as a Scout leader, Den mother, club advisor, PTA representative, etc. and cheerful limitless chauffeuring to all sorts of music lessons, school events and sport competitions. She was the driving force behind hosting a foreign exchange student, Andre Peters, from Germany in 1968. After her oldest children left home for college Marian went back to school at Winthrop College in a graduate studies program in Library Science. With those skills she worked in the Charlotte Mecklenburg School System as a Media Specialist (1972-79) and later on the Steering Committee of the Friends of the Mecklenburg Co. Public Library. She also enjoyed supporting The Friends of the Public Library financially. She was a frequent volunteer in tutorial and enrichment programs at Elizabeth School, First United Presbyterian Church, and at Sharon and Oakhurst School. Marian and Dick, both avid and accomplished golfers, were members of Myers Park Country Club where they formed lifelong friendships and enjoyed many golfing and travel events over the years. They were also regulars at the Club dance events and were well known for their lively dancing from foxtrot to polka. Marian is survived by her brother, Richard D. Sprague of Greensboro, NC and her three children: daughter Holly Harkness Clark and husband, Don of Denver, Colorado: son Robert and wife, Carol May of Asheville NC: and son Larry and his wife, Anne Pell of Mooresville, NC and seven grandchildren: Adrian  Clark (Cara), Lisa Clark (Jack), and Loren (Tina) Clark; Maxwell and Alex Harkness; and Blayney Armstrong (Curtis) and Daniel Harkness; and four great grandchildren, Anderson, Nathan, and Chloe Anne Armstrong and Wilder Clark. Marian remembers her mother, Mary Audella Simons Sprague, recite from memory the last verse of the poem “Thanatopsis” by William Cullen Bryant shortly before her death at age 95.  "So live, that when thy summons comes to join The innumerable caravan which moves To that mysterious realm, where each shall take His chamber in the silent halls of death, Thou go not, like the quarry-slave at night, Scourged to his dungeon, but, sustained and soothed By an unfaltering trust, approach thy grave, Like one who wraps the drapery of his couch About him, and lies down to pleasant dreams."   Marian trusted her faith and believed she could feel God marching through history...through generations of family; Eve, Sarah, Esther, grandmother, mother and now me. She said “My role is to expect Him, to listen for Him. We are God’s children.” The family expresses their appreciation to the dedicated and caring staff at The Pines at Davidson for their loving comfort to Marian throughout her entire stay. Memorial gifts should be sent to Trinity Presbyterian Church in Charlotte, NC. Cavin-Cook Funeral Home & Crematory, Mooresville, is serving the Harkness familly. Condolences may be made to the family at www.cavin-cook.com.

Marian Sprague Harkness, age 97, died on February 10, 2021 at The Pines at Davidson, Davidson, NC where she had resided since 2013. She was born in Salamanca, NY on August 15, 1923. Education was highly valued in her family and when she graduated... View Obituary & Service Information

The family of Marian Harkness created this Life Tributes page to make it easy to share your memories.

Send flowers to the Harkness family.