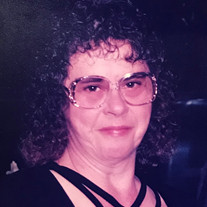 LOYCE A. STEWART Loyce Ann Stewart of Harrisonville, Missouri was born December 21, 1951 in Kansas City, Missouri the daughter of James and Betty Jo (Lockard) Cook. She departed this life on Sunday, December 26, 2021 at Meadow View Health and Rehab, Harrisonville at the age of 70 years and 5 days. On April 21, 1973, Loyce was united in marriage to Robert Stewart in Moberly, Missouri. Loyce was employed as a LPN for Halifax Hospital, Daytona, Florida and later became a manager at Hardee's when she moved to Mooresville, North Carolina in 1985. She enjoyed traveling and going to the Casino. Loyce's greatest joy and love were her children and grandchildren. Family meant everything to her and everything she did was for her family. Besides her parents, she was preceded in death by her husband, Robert Stewart on September 4, 1999 and her sister, Shirley Jean Sandusky. Loyce is survived by two sons, Eddie Stewart and wife Carla, Hickory, North Carolina, Michael Stewart and wife Deana, Harrisonville, Missouri; 5 daughters, Vicki Stewart, State of North Carolina, Cathy Igoe and husband Robbie, Summerville, South Carolina, Carolyn Cook, Garden City, Missouri, Chrissy Stewart and Jeannie Stewart both of Harrisonville, Missouri; 10 grandchildren; 9 great-grandchildren; other relatives and many friends. A graveside service will be held at 10 AM, Tuesday, January 4, 2022, at Glenwood Memorial Park, Mooresville. Cavin-Cook Funeral Home, Mooresville, is serving the family of Mrs. Stewart. Condolences may be made to the family at www.cavin-cook.com.

The family of Loyce Ann Stewart created this Life Tributes page to make it easy to share your memories.

Send flowers to the Stewart family.