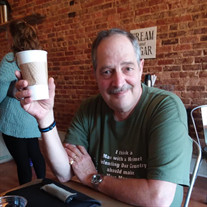 Louis Stephen Biagetti, 74, of Mooresville, North Carolina, passed away on January 21, 2022. He was born on January 3, 1948 in Yonkers, NY to the late Anzo and Mary Montalbano Biagetti. When Louis was very young, his parents divorced and he was raised by his loving mother and beloved step-father, the late Stephen Kubicsko. Lou graduated in 1966 from Roy C. Ketchen High School in Wappingers Falls, NY. He married his high school sweetheart, Dana Ruffo, on November 15, 1969. As a young boy, Lou always wanted to be a policeman. He was drafted into the US Army on August 21, 1967. He was stationed in Germany as an M.P. In 1971, he was hired on to the Town of Poughkeepsie Police Department as a patrolman. He retired as a Lieutenant in 1997. He and his wife moved to Mooresville, NC later that year and Lou worked as a Public Safety Officer for the Mooresville Police Department for 8 years, retiring in 2014. After retirement, you could find Lou at several coffee shops in Mooresville making lots of new friends. He is survived by his loving wife of 52 years, Dana Ruffo Biagetti; brother, Stephen Kubicsko (Jeanne), sister, Sharon Beale (Kurt), sister, Debbie Yannelli (Al), brother, Gerard Biagetti; numerous nieces, nephews, great nieces and nephews, many cousins; and his beloved dogs, Tiny and Baby. A visitation will be held on Friday, January 28, 2022 from 4:00pm-6:00pm at Cavin-Cook Funeral Home & Crematory. The funeral service will be held at 6:00pm in the chapel of the funeral home with Father Mark Lawlor officiating. In lieu of flowers, the family asks that you please donate to your local animal rescue or shelter. Cavin-Cook Funeral Home & Crematory, Mooresville, is serving the Biagetti family. Condolences may be made to the family at www.cavin-cook.com.

Louis Stephen Biagetti, 74, of Mooresville, North Carolina, passed away on January 21, 2022. He was born on January 3, 1948 in Yonkers, NY to the late Anzo and Mary Montalbano Biagetti. When Louis was very young, his parents divorced and he... View Obituary & Service Information

The family of Louis Stephen Biagetti created this Life Tributes page to make it easy to share your memories.

Send flowers to the Biagetti family.