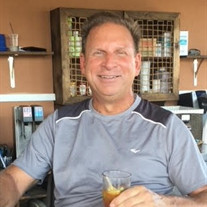 Kenneth William Tillotson, 64, of Bay Shore, NY passed away on Monday, January 24, 2022, at his residence in Mooresville, NC. Born September 20, 1957, in Rosedale, NY, he was a son of the late Frank and Carolyn Vetter Tillotson. Mr. Tillotson was a retired police officer for the Suffolk County Police Department. He started his career at Allstate, but once he was accepted into the police academy, he pursued that career and aspiration. Mr. Tillotson was a family man at heart. He loved his three daughters very much; they were his pride and joy. Mr. Tillotson was fanatical about landscaping and always keeping his yard looking nice. He was a huge fan of the NY Islanders hockey team; he was a season ticket holder for many years and loved taking his daughters to games. He was also a fan of the NY Jets football team and the NY Yankees. Mr. Tillotson loved playing sports, especially hockey, baseball, and basketball. He played in the Suffolk County Police Department hockey league, played in men's soccer leagues for years on Long Island and always found pick-up basketball games to compete in. Sports and staying active were always at the center of his hobbies. He was a coach at heart; he coached his girls' basketball and soccer teams for many childhood years. He always made time to attend his kids' sporting events, school plays and award ceremonies. He was a very involved and present father. Before moving to North Carolina, he had lived in the Myrtle Beach area. He enjoyed taking long walks on the beach and hearing the ocean waves; that was his happy place. He loved being a grandpa, his grandkids called him Papi. Mr. Tillotson had a love for snack foods, some of his favorites included devil dogs, twinkies, Swiss rolls, Cheetos, soft pretzels, and he always loved a box of his cheerios or cocoa puffs. He was a brave, strong and resilient man. He was a doer and a helper. He had a work ethic like no one else. He always used to tell us, "Hard work beats talent when talent doesn't work hard." He would have taken his shirt off his back for anyone, he was always someone you could count on. In addition to his parents, Mr. Tillotson was preceded in death by his mother and father-in-law, Sylvia and Stephen Zawyrucha. He is survived by his daughters, Amy Tillotson, Lauren Tillotson and Heather Columbano; ex-wife, Janet Tillotson; sons-in-law, Douglas Moulton and Chris Columbano; grandchildren, Jackson, Dominic, Paul and Gabriella Columbano; brothers, Frank Tillotson, Robert Tillotson, Steven Tillotson and Richard Tillotson; sister, Carolyn Baksa and many loved nieces and nephews along with brothers and sisters-in-law. A memorial service will be held at 11:00 AM, Saturday, February 5, 2022, at the Heritage House of Cavin-Cook Funeral Home, Mooresville, with Father Mark Lawlor officiating. For those who are unable to attend the service, you may go to the following link for the live stream https://view.oneroomstreaming.com/authorise.php?k=1643677482163618 Donations can be made to the Tunnel to Towers Foundation, In Honor of Kenneth W. Tillotson, https://t2t.org. Cavin-Cook Funeral Home, Mooresville, is serving the family of Mr. Tillotson. Condolences may be made to the family at www.cavin-cook.com.

Kenneth William Tillotson, 64, of Bay Shore, NY passed away on Monday, January 24, 2022, at his residence in Mooresville, NC. Born September 20, 1957, in Rosedale, NY, he was a son of the late Frank and Carolyn Vetter Tillotson. Mr. Tillotson... View Obituary & Service Information

The family of Kenneth William Tillotson created this Life Tributes page to make it easy to share your memories.

Kenneth William Tillotson, 64, of Bay Shore, NY passed away on...

Send flowers to the Tillotson family.