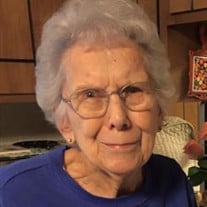 Kathleen Barnette Stowe, 94, of Mooresville, was surrounded by family members as her spirit left her body on Sunday, August 8, 2021 at the Gordon Hospice House in Statesville. She was born on June 23, 1927 in Iredell County, NC, to the late Jesse and Chole Karriker Barnette. She married Calvin Stowe on September 30, 1944. When Calvin returned from Germany having been wounded, he and Kathleen made their home in Davidson until 1952 when they and their young children moved to Mooresville. That's when they joined Fair View United Methodist Church in Mt. Mourne. Kathleen was hard working and enjoyed canning the vegetables they grew in their garden. Even after being widowed in 1974 she found a way to have a small garden so she could can the vegetables. She worked at Burlington Mills for many years and when she retired, she stayed busy sewing, doing alterations, taking care of other in their homes, and even moved one lady into her home to take care of her. She also babysat her grandchildren and then her great grandchildren. After 1974 she and her friends enjoyed their "girls-night-out" Friday nights for many years. In addition to her parents, she was preceded in death by her husband, Calvin Coolidge Stowe; sister, Ruby; brother, Robert, Harold, and Hubert. She is survived by her son, Wayne Stowe and wife, Vickey, daughter, Joan Hoover and husband, Jim; grandchildren, Janus Elliott and husband, Tim, Sara Cline and husband, Jerry, Sunny Cooke and husband, Darin, Donnie Hudspeth and wife, Susan; great grandchildren, Kelsey Crabtree and husband, Rusty, Mia Elliott, Ella and Lily Hudspeth, Jake Cline, Clay and Carter Cooke; brother, Jesse and wife, Nell; and sister, Shannon; and numerous nieces and nephews. A graveside service will be held at 4:00 PM on Friday, August 13 at Fair View United Methodist Church Cemetery with Rev. Nathan Finsel officiating. For those who are unable to attend the graveside, you may go to the following link for the live stream https://www.facebook.com/CavinCookFuneralHomeServices/ In lieu of flowers, memorials may be made to Gideons International, PO Box 872, Mooresville, NC 28115 or Fair View United Methodist Church, PO Box 27, Mt. Mourne, NC 28123. Cavin-Cook Funeral Home & Crematory, Mooresville, is serving the Stowe family. Condolences may be made to the family at www.cavin-cook.com.

Kathleen Barnette Stowe, 94, of Mooresville, was surrounded by family members as her spirit left her body on Sunday, August 8, 2021 at the Gordon Hospice House in Statesville. She was born on June 23, 1927 in Iredell County, NC, to the late... View Obituary & Service Information

The family of Kathleen Barnette Stowe created this Life Tributes page to make it easy to share your memories.

Kathleen Barnette Stowe, 94, of Mooresville, was surrounded by...

Send flowers to the Stowe family.