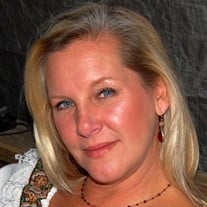 Retired Suffolk County police officer Karilyn Drago (formally McLoughlin), age 59 of Sayville, NY was called home on August 7, 2021 after a long and courageous battle with cancer. She died peacefully at home in the arms of her husband William and daughter Caitrin. She is remembered with love by her parents Marilyn and Anthony Zurick, brother Anthony Zurick and his wife Laurie, sister Colleen Heppler and her husband Scott, niece and nephew Ashley and Ethan Zurick, and grandson Declan McLoughlin. A Long Island native, Karilyn was a beach lover and spent a lot of time with her toes in the sand. The beaches and restaurants of Long Island's south shore and Fire Island where some of her favorite places. She loved to cook and prepared an impressive dinner including hors d'oeuvres every Saturday night. Karilyn graduated from Connetquot High School in 1980 and planned a career in medicine. After earning a bachelor's degree in biology from State University of New York in New Paltz in 1985 her plans took an unexpected turn when at the suggestion of her father she took the Suffolk County police exam and became a police officer, a job she was very proud of. Karilyn retired in 2009 after 20 years on the job and with new found time on her hands took up knitting and became more active in her local parish at Saint John Nepomucene in Bohemia. Knitting became a passion and after a few years of practice she was turning out gloves, scarfs, and sweaters that turned heads wherever she went. At Saint John Karilyn was a lector and lay Eucharistic minister. After completing a three year course with the Pastoral Formation Institute she led the Women's Spiritual Growth group for two years following. Her work in that role was admired and touched many lives. Karilyn continued to knit and remained active at St. John until moving to North Carolina in March of this year to be closer to family. Unfortunately it was about this time her cancer became untreatable and then ultimately took her from us. Karilyn was pure in heart and lived an honest life. Her depth of faith, kindness, and generosity is hard to match, yet inspiring. Although her place in heaven is untimely, it is well deserved. She will be missed by many. The family will receive friends on Wednesday, August 11 from 6:00-8:00 PM at Cavin-Cook Funeral Home. A Mass of Christian Burial will be held at 12:00 PM on Thursday, August 12 at St. Therese Catholic Church, Mooresville. The broadcast can be accessed LIVE from this page on our website: https://www.sainttherese.net/mass-livestream Livestream start time: 11:57am and Livestream end time: 1:20pm Viewers should scroll down the page and click the arrow in the center of the StreamSpot viewer to start watching the stream (It will say "Live" in the upper left corner beginning at 11:57am). To access the broadcast after the funeral: The broadcast can also be watched from the Mass Livestream page on our website for 1 week after the funeral has ended. Viewers will need to click in the StreamSpot viewer, then click the option for "Previous Broadcasts." From there, use the arrows to scroll through the broadcasts to get to the funeral and then click the picture to play the broadcast. Burial will follow the service at Glenwood Memorial Park, Mooresville. For those who are unable to attend the graveside, you may go to the following link for the live stream https://www.facebook.com/CavinCookFuneralHomeServices/ In lieu of flowers donations to Tunnel to Towers Foundation in Karilyn's name are appreciated. Cavin-Cook Funeral Home, Mooresville, is serving the Drago family. Condolences may be made to the family at www.cavin-cook.com.

Retired Suffolk County police officer Karilyn Drago (formally McLoughlin), age 59 of Sayville, NY was called home on August 7, 2021 after a long and courageous battle with cancer. She died peacefully at home in the arms of her husband William... View Obituary & Service Information

The family of Karilyn Ann Drago created this Life Tributes page to make it easy to share your memories.

Send flowers to the Drago family.