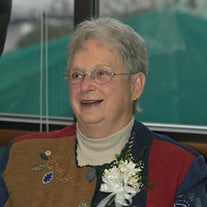 Joyce Lorene Huff, 94, of Statesville, NC died on Wednesday, February 16, 2022 at the Gordon Hospice House in Statesville, NC. She was born on January 29, 1928 in North Liberty, Indiana to the late Oliver and Flora Hough. She married Robert Eugene Huff and began building a life with him in the US Army for 23 years. They were married 63 years. In 1990, they moved to North Carolina. Joyce was a devoted wife and mother. She enjoyed making people laugh at home, at church, or in her community. Some say she was "the life of the party". She loved her family. She worked alongside many people to build Wiggins Road Baptist Church in the 1990's and considered them brothers and sisters in Christ. In addition to her parents, she was preceded in death by her husband, Robert; daughter, Laurie Lynn Huff; a grandson, two brothers, and two sisters. She is survived by her children, Robert E. Huff II of Concord, NC, Patricia Kay Wiltfong of Columbus, GA, Mary Jean McClish of Statesville, NC; 8 grandchildren, 12 great grandchildren. The family will receive friends on Monday, February 21 from 1:00-2:00 PM with a service following at 2:00 PM at Cavin-Cook Funeral Home Chapel with Rev. Jerry Sammet officiating. Burial will be held at the Salisbury National Cemetery at a later date. In lieu of flowers, memorials may be made to St. Jude Children's Hospital, 262 Danny Thomas Place, Memphis, TN 38105 or Hospice & Palliative Care of Iredell County, 2347 Simonton Road, Statesville, NC 28625. Cavin-Cook Funeral Home & Crematory, Mooresville, is serving the Huff family. Condolences may be made to the family at www.cavin-cook.com.

Joyce Lorene Huff, 94, of Statesville, NC died on Wednesday, February 16, 2022 at the Gordon Hospice House in Statesville, NC. She was born on January 29, 1928 in North Liberty, Indiana to the late Oliver and Flora Hough. She married Robert... View Obituary & Service Information

The family of Joyce Lorene Huff created this Life Tributes page to make it easy to share your memories.

Send flowers to the Huff family.