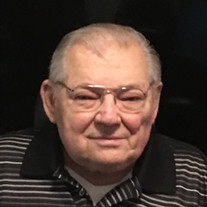 Mooresville, North Carolina - John Michael Wojtkowski, 87, of Mooresville, NC, passed away on Tuesday, March 22, surrounded by his loving family, at the S. Mitchell Mack Hospice House. He will be dearly missed by his wife, 8 children, 17 grandchildren, and 11 great grandchildren, but they all look forward to seeing him again in Heaven. John was born in Pittsfield, MA, on September 20, 1934 to the late Jan M. and Jane P. (Cebula) Wojtkowski and attended Pittsfield schools. He graduated cum laude with a Bachelor's degree in Mechanical Engineering from Western New England College in Springfield, MA in 1971. He firmly believed that a good education was key to being able to provide a good future for his children. As a certified safety professional, he was employed by General Electric Ordnance Systems in Pittsfield, MA as the safety administrator until his retirement in 1992. In addition to the joy he felt in spending time with his family, John had a passion for bridge, not only as a player but as a director. He was a life master in bridge, often traveling to various locations to participate in bridge tournaments. He especially enjoyed partnering with his teenage granddaughter, Katie, in some of the tournaments. He served as the treasurer for the Knights of Columbus in Pittsfield. He also loved to travel, visiting such places as England, Jamaica, Hawaii, Niagara Falls, and California. He shared many long weekends with family members to attend Christmas and musical productions. John is survived by his wife of 68 years, Margaret Elizabeth (Hamilton) Wojtkowski and his sister Janet and her husband Lance Randall of Creve Coeur, IL. He is also survived by his eight children, Pamela and her husband Andrew Coty of Keene, NH; John Jr. and his wife Jin of Indianapolis, IN; Daniel of North Port, FL; Mary and her husband Steven Robinson of N. Andover, MA; Kathleen and her husband Richard Hart of Mooresville; Denise and her late husband Peter Podavini of Huntersville, NC; Susan and her husband Timothy Smith of Concord, NC; and Shaun and his wife Debra of Newport News, VA. He was very proud of his children, their accomplishments, and their families. The family will receive friends on Friday, March 25 between 6 and 8 p.m. at the Cavin-Cook Funeral Home. Funeral services will be held at St. Therese Catholic Church in Mooresville on Saturday, March 26 at 11 a.m. Interment will immediately follow the Mass at Iredell Memorial Park in Statesville. In lieu of flowers, donations can be made to either St. Therese Catholic Church or the S. Mitchell Mack Hospice House. Cavin-Cook Funeral Home & Crematory, Mooresville, is serving the Wojtkowski family. Condolences may be made to the family at www.cavin-cook.com.

Mooresville, North Carolina - John Michael Wojtkowski, 87, of Mooresville, NC, passed away on Tuesday, March 22, surrounded by his loving family, at the S. Mitchell Mack Hospice House. He will be dearly missed by his wife, 8 children, 17 grandchildren,... View Obituary & Service Information

The family of John Michael Wojtkowski created this Life Tributes page to make it easy to share your memories.

Send flowers to the Wojtkowski family.