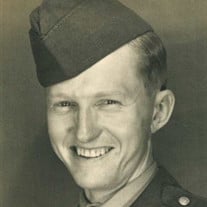 John Worth Newman Sr. passed away on March 19, 2021. The North Carolina native was born in Elkin, on November 04, 1923. His parents Paul and Mabel Newman, both deceased, were from Elkin North Carolina. He graduated from Ronda High School and Presbyterian College. He enlisted in the United States Army Airforce, where he served as a waist-gunner on the B-17 bomber "Our Baby" with the 8th Air Force, 94th Bomb Group, 410th Bombardment Squadron, based on Rougham Air Field ,England He flew 25 missions, including D-Day and The Battle of the Bulge, and was honorably discharged with the rank of Staff Sergeant. In December of 2017, he was honored from the French Consultant with the Jubilee of Liberty Medal for his participation in the invasion of Normandy. Upon leaving the military he received his pilot's license from the grass strip airport on Waterlynn Rd, that he, his Uncle Lonnie Cox, and Kenneth Johnson owned, developed and started a 15 year career in Crop dusting. His airplane conversions included a war surplus Stearman crop duster, and an early J3 Piper plane that later inspired John Piper on the design of Piper cropdusting planes offerings. After his marriage with Betty Lou Clary and the start of a family, he left crop dusting to begin a new career, starting Newman Building & Supply. This eventually evolved into a ten years of contracting as Facilities Director for the Charlotte Motor Speedway, designing and building the first VIP luxury boxes. From this venture, he was able to take his family on a ride in the GoodYear Blimp, Mayflower and a ride on an elephant from the Ringling Brother Circus. During his off time from the speedway, he was able to build a cabin on Cape Lookout; using a redwood hot tub for a fresh water tower. The family spent a lot of time there making great memories. Upon retirement, his passion was a competitive gardener, growing softball size tomatoes. His joy of gardening was only matched by his generosity of sharing the bounty with the neighborhood. The biggest challenge with his gardening buddies was who would have the first tomato. He was preceded in death by his wife, Betty Clary Newman; grandson, Joshua Trace Newman; brothers, Murl Newman, Dick Newman; sisters, Madelone Blackburn, Betty Blanton and Katherine Self. He is survived by his sisters Ruth Edleman and Sue Hoots, sons John Worth Newman, Jr. (Patricia), James (Jimmy) Edward Newman, Jeffrey Jon Newman (Tonya). Grandchildren Katie (Nathan) Koch, Brian Donahue, Jonathan Newman, and Jessica Newman and Great granddaughter Madeleine Koch. Funeral services will be held at 4:00 PM on Tuesday, March 23 at Cavin-Cook Funeral Home Chapel with Eddie Karriker officiating. Burial with full military honors will follow the service at Glenwood Memorial Park. For those who are unable to attend the service, you may go to the following link for the live stream https://www.youtube.com/channel/UC864hAs96dTRLVVL1la0Qlw/videos?view=2&flow=list For those who are unable to attend the graveside, you may go to the following link for the live stream https://www.facebook.com/CavinCookFuneralHomeServices/ Thank you to all of his caregivers that took special care of him. In lieu of flowers, please make donations to Hospice and Palliative Care of Iredell County 2347 Simonton Road, Statesville, NC 28625. Cavin-Cook Funeral Home, Mooresville, is serving the Newman family. Condolences may be made to the family at www.cavin-cook.com.

John Worth Newman Sr. passed away on March 19, 2021. The North Carolina native was born in Elkin, on November 04, 1923. His parents Paul and Mabel Newman, both deceased, were from Elkin North Carolina. He graduated from Ronda High School and... View Obituary & Service Information

The family of John Worth Newman created this Life Tributes page to make it easy to share your memories.

Send flowers to the Newman family.