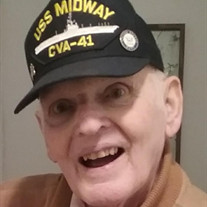 John William "Bill" Marshall passed away peaceful at Lake Norman Regional on August 12, 2021. He was 85 years young. Born in Ohio, he was the son of the late John Paul Marshall and Nola Mione Shaw. Growing up as a child, he loved to shoot... View Obituary & Service Information

The family of John William Marshall created this Life Tributes page to make it easy to share your memories.

Send flowers to the Marshall family.