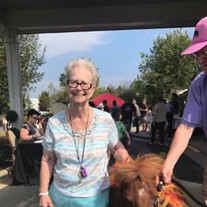 Jessie Ann “Mickey” Fowler, 86, of Mooresville, passed away peacefully on Friday, February 12, 2021, at Gordon Hospice House in Statesville, NC. Mickey was born on June 9, 1934, in Charlotte, NC, to the late Ira Coneheign Cope and Jessie Rae Oates Cope. In addition to her parents, she was preceded in death by her husband of 53 years, Earl Fowler and daughter, Susan G. Coignard. Mickey is survived by daughter, Gayle Long (Mike); grandchildren, Benjamin Bennett, Kimberly Sloop (Terry), Heather Adams (Travis), Phillip Coignard, Jesse Coignard and great grandchildren, Kaleigh Sloop, Piper Bennett and Kyndal Sloop. Mickey was a proud graduate of Harding High School, class of 1952. She spoke fondly of Harding classmates who continued to stay in touch sharing newsletters and memories of early friendships. Mickey retired from Delmar Printing Company as a typesetter with 20 years of service. After retirement, she enjoyed traveling and living on Lake Norman with husband, Earl Fowler. You could find her enjoying lake life, and entertaining family and neighbors with her good southern cooking. She also enjoyed playing cards with friends at the Mooresville Citizens Center where she was known for her Canasta winning hands. The family is grateful for the dedicated staff and volunteers from Williamson Chapel United Methodist Church Ever-Ready Senior group. The family would also like to thank professional caregivers at Atria Senior Living including Donna, Shelly, Pat, Margaret and numerous others who provided their friendship and care. A service to celebrate her life will be held at a later date. In lieu of flowers, memorials may be made to Gordon Hospice House, 2341 Simonton Rd., Statesville, NC 28625. Cavin-Cook Funeral Home, Mooresville, is serving the family of Mrs. Fowler. Condolences may be made to the family at www.cavin-cook.com.

The family of Jessie Ann "Mickey" Fowler created this Life Tributes page to make it easy to share your memories.

Send flowers to the Fowler family.