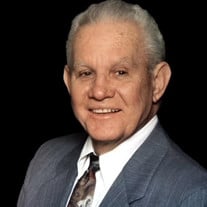 Jesse Eugene "Buddy" Lippard was born on January 25, 1929, and passed away on November 24, 2021. The middle child of Sarah Troutman Lippard and Fred Eugene Lippard, he was raised in Iredell County on a farm near Troutman, N.C. He received his High School Diploma from Barium Springs High School, a children's home at the time. (Though Buddy had two parents, his father arranged for him to go there so he could play football.) He received his Bachelor of Science from Appalachian State Teachers College, and accepted a Coaching and Science Teacher position at a High School in Davidson County, N.C. After two years he was called into service for the U.S. Army and was sent to Fort Jackson, S.C. Upon completion of basic training, he was sent to Korea as a Personnel Specialist in charge of officers' records. When he returned home, he met the love of his life, Nancy Carole Luther, and married her two years later. They were married for over 57 years. He received a Fellowship to Graduate School at Appalachian State University, and taught Biology and General Science while working on his Masters Degrees. He earned three Masters Degrees, in Biology, Physical Education, and Business Administration. Upon graduation, he accepted a position with the American Lung Association, where he worked as an administrator and community outreach speaker for over 24 years. His greatest accomplishment was the development of an education program on the dangers of smoking, a difficult feat in 1960's North Carolina. He spoke to thousands of students on the dangers of smoking, and conducted numerous clinics to help people stop. In the years following he worked in Management and Public Relations at several Auto Auction Houses, and most recently was a General Manager for Statesville Dealer's Auction. Buddy was a member of Davidson United Methodist Church, where he helped run the soundboard for church services and assisted with many charity missions. He was very accomplished and always strived for the highest goals he could. He was an Eagle Scout, a Master Mason for over 60 years, an official for most High School and College sports for over 38 years, and Umpire in Chief for much of Western North Carolina for many years. He assisted in writing the Fast-pitch Softball Rule Book for Women's Softball, and he himself was an outstanding Fast-pitch Softball Pitcher, winning many honors and awards. The accomplishment he was most proud of was being an outstanding Dad and Grandfather. He was preceded in death by his wife, Nancy Luther Lippard, sister, Carolyn Lippard Brown, and brother, Fred Hyams "Rick" Lippard. He is survived by his children, Amy Lippard Bearden and Daniel Eugene "Danny" LIppard and his wife Lisa Urban Lippard; Grandchildren, Gryphon Dallas Bearden and John Caleb Bearden; Brother-in-law, Randy Luther and Sister-in-law Deborah Luther; their children, Hayley Anne Luther and Michael Randall Luther. When asked how he was, he would always say "I'm Still Good Lookin'!" All who ever met him would agree, adding he was also generous, principled, friendly, and loving to everyone in his life. He will be greatly missed by all whose life he touched. Funeral Services will be held on Wednesday, December 1, 2021 at 1:00pm in the Heritage House on the campus of Cavin-Cook Funeral Home & Crematory, Mooresville, NC with the Rev. Jim Humphries officiating. Burial will follow at Iredell Memorial Gardens, Statesville, NC. A reception for friends and family will be held from 4-7:00pm in the Heritage House on the campus of Cavin-Cook Funeral Home & Crematory. For those who are unable to attend the service, you may go to the following link for the live stream https://view.oneroomstreaming.com/authorise.php?k=1638052209150629 For those who are unable to attend the graveside, you may go to the following link for the live stream https://view.oneroomstreaming.com/authorise.php?k=1638065320150648 In lieu of flowers, memorial donations may be made to Davidson United Methodist Church, PO Box 718, Davidson, NC 28036 or Masonic Home For Children, 600 College St, Oxford, NC 27565. Cavin-Cook Funeral Home & Crematory, Mooresville, is serving the Lippard family. Condolences may be made to the family at www.cavin-cook.com.

Jesse Eugene "Buddy" Lippard was born on January 25, 1929, and passed away on November 24, 2021. The middle child of Sarah Troutman Lippard and Fred Eugene Lippard, he was raised in Iredell County on a farm near Troutman, N.C. He received his... View Obituary & Service Information

The family of Jesse Eugene Lippard created this Life Tributes page to make it easy to share your memories.

Send flowers to the Lippard family.