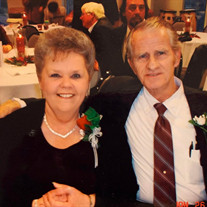 Sandra Ann Webster, age 74, went to her heavenly home on Friday, January 7, 2022, at Iredell Memorial Hospital. Sandra was born on December 14, 1947, to the late James Erwin and Jessie Abernathy Erwin of Mooresville. Sandra was a loving mother, grandmother, great grandmother, and a friend to all. She enjoyed being a homemaker, canning homegrown produce from her garden, sewing, thrift shopping, and spoiling her grandbabies. Most of all, she loved spending time with her family and loved her grandchildren more than anything. James Rexford Webster, age 77, joined his wife in eternity with the Lord just 4 days later, on January 12, 2022, at their residence in Mooresville, NC. James was born on June 2, 1944, to the late John Webster and Maude Johnston Webster of Mooresville. James was a loving father, grandfather, and great grandfather. He spent his career as Head Miller at Bartlett Milling in Statesville, NC for over 25 years and retired in 2012. He enjoyed working in his garden, was an excellent craftsman, and could rebuild an engine completely from scratch. He never slowed down and always stayed busy tinkering in projects. James and Sandra celebrated 57 years of marriage on September 5, 2021. In addition to Sandra's parents, she is preceded in death by brothers, Kent Erwin and Fred Erwin (Linda). In addition to James' parents, he is preceded in death by one brother, Ray Webster. Those left to cherish the memories of Sandra and James, include one daughter, Kimberly Ammons, and husband, Timothy Ammons; grandchildren, Zeke Ammons (Kelly), Aaron Ammons (Amanda), Abby Pelletier, Rebecca Ammons (Aniello), and Josh Ammons; six great-grandchildren, Hunter Pelletier, Wyldr Ammons, Booker Ammons, Harvey Ammons, Celeste Marro, and Cohen Marro. Also surviving are Sandra's sisters, Barbara Nance (Leonard) and Teresa Erwin; two sisters to James, Nancy Moore, Shirley Nichols (Bobby), and sister-in-law, Dot Webster, and many beloved nieces and nephews. Visitation for James and Sandra will be held on Thursday, January 13th, 2022, from 5:00 pm to 7:00 pm, and Friday 1:00 pm to 2:00 pm at Cavin Cook Funeral Home. Family will not be present for these viewing times. Private services to be held. The family would like to thank the staff at Hospice and Palliative Care of Iredell County and Iredell Memorial Hospital for their compassionate and excellent care. Cavin-Cook Funeral Home & Crematory, Mooresville, is serving the Webster family. Condolences may be sent to the family at www.cavin-cook.com.

The family of James & Sandra Webster created this Life Tributes page to make it easy to share your memories.

Send flowers to the Webster family.