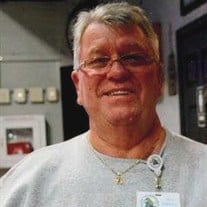 James Larry Ramsey, 73, of Denver, North Carolina, passed away on August 26, 2021. He was born on May 1, 1948, in Helena, AR, to the late Richard and Willie Turner Ramsey. Mr. Ramsey proudly served his country in the United States Army. In 1968, he married the love of his life, Shirley, and they recently celebrated their 53rd wedding anniversary. Larry was a man of many talents and he loved coming to the aid of his friends, family, and neighbors to help fix their problems. He also loved to travel with his travel buddies and his wife. Larry and Shirley were big in the shag world and attended the Annual SOS at North Myrtle Beach for 30 consecutive years. Also, members of the Lake Norman Shag Cluf for 23 years. His favorite pastime was watching his grandchildren play sports. He was always an avid fan and sometimes a loud one. Larry's other hobby was restoring a 1985 El Camino. He wanted to pass it down to his grandchildren. Larry was a loving husband, great dad, and a wonderful Papa, who never met a stranger. In addition to his parents, he is preceded in death by his older brother, Richard Ramsey. He is survived by his wife, Shirley Hagler Ramsey; daughter, Wendy Burkhouse and son-in-law, Cliff Burkhouse; grandchildren, Madison, Chloe and Jaxson Burkhouse; brother, George Gary Ramsey; a very special nephew, Gary Ramsey (Bub) and several nieces. A Celebration of Life Service will be held at a later date. In lieu of flowers, memorial contributions can be made to Hospice and Palliative Care of the Charlotte Region, 7845 Little Ave, Charlotte, NC 28226 Cavin-Cook Funeral Home & Crematory, Mooresville, is serving the Ramsey family. Condolences may be made to the family at www.cavin-cook.com.

James Larry Ramsey, 73, of Denver, North Carolina, passed away on August 26, 2021. He was born on May 1, 1948, in Helena, AR, to the late Richard and Willie Turner Ramsey. Mr. Ramsey proudly served his country in the United States Army.... View Obituary & Service Information

The family of James Larry Ramsey created this Life Tributes page to make it easy to share your memories.

Send flowers to the Ramsey family.