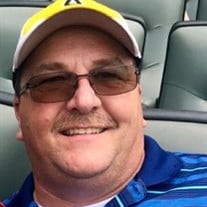 Garry Linn Broadway, 52, of Sherrills Ford, passed away on Sunday, February 7, 2021 at Novant Health Presbyterian, Charlotte. Born November 8, 1968, in Davie County, NC, he was a son of the late John Richard Broadway and Judy Louise Carter Broadway. Garry graduated high school in Davie County, NC, and went on to serve in the Marines. He was a devoted father and husband. Garry worked in Parks and Recreation for many years before turning his focus to his family. He attended Elevation Church-Lake Norman where he faithfully served as the parking team coordinator for several years. He treasured all of the friendships and connections that he made while serving. Rain or shine he would be out there in the parking lot to usher cars in and welcome everyone to church. He felt blessed to be able to serve our God in whatever capacity that he was called to serve. Garry loved camping and all things sports related. He was an avid Appalachian State and Carolina Panthers football fan. He never missed a game whether in the stadium or streaming on his phone. Garry was rarely seen without a hat or some sort of clothing supporting his teams. There was nothing that made him happier than to be involved in and part of his children’s activities. From the days of band boosters and parent volunteering, when Jacklyne was in school to more recent days of driving the bus for field trips with Grayson’s school. Always the first to volunteer, and never missed a game or event. Coaching his son’s teams over the years was a great passion of Garry’s, his love of sports and his kids merged into one. He coached many seasons of basketball and flag football over the years. When Grayson started playing baseball, he shifted roles from Coach to just Dad (with some sideline coaching thrown in occasionally, yes, he was that dad sometimes). Garry loved being on the field to help with practice or anything the team needed. He was simply happy to be there. His family was his heart in every way. We would be remised if we did not mention his love and obsession for his four-legged children, Mater & Gus, his Boys, as he referred to them. Every day would end with the three of them snuggled on the couch watching TV. In addition to his parents, Garry was preceded in death by siblings, David Bailey, Johnny Broadway, John Bailey, Jimmy Bailey and Charles Bailey. He is survived by his beloved wife, Lisa Curran Broadway; loving children, Jacklyne Broadway and Grayson Broadway; and siblings, Paula Broadway Reavis (Todd), Richard Broadway (Melissa), Mary Jane Bailey Cook (Tracy), Charlene Bailey Helmstetler and Kathy Bailey Owens. A memorial service will be held at 2 PM, Saturday, February 13, 2021, at the Cavin-Cook Funeral Home Chapel with Chad Hampton officiating. The family will receive friends immediately following the service. For those who are unable to attend the service, you may go to the following link for the live stream https://www.youtube.com/channel/UC864hAs96dTRLVVL1la0Qlw/videos?view=2&flow=list In lieu of flowers, memorials may be made to the following, all of which held a special place in Garry’s heart and meant a lot to the family. A Miracle for Ella Rose https://www.gofundme.com/f/v39m2v-a-miracle-for-ella-rose; Pinky Swear Foundation https://www.pinkyswear.org/ and Elevation Church-Lake Norman https://elevationchurch.org/giving/  Cavin-Cook Funeral Home, Mooresville, is serving the Broadway family. Condolences may be made to the family at www.cavin-cook.com.

The family of Garry Linn Broadway created this Life Tributes page to make it easy to share your memories.

Garry Linn Broadway, 52, of Sherrills Ford, passed away on Sunday,...

Send flowers to the Broadway family.