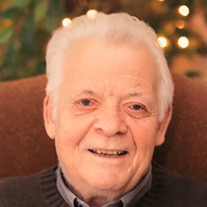 Frank D. Raffa, most recently a resident of Maple Leaf Health Care of Statesville, NC, formerly of Huntersville, NC, and previously, of Lake Grove, New York, passed away peacefully on November 16, 2021, after a long illness. Frank was preceded in death by his loving wife Ann, by his brothers Edward and Joseph, and by his parents. He is survived by his sons Steven, of Salisbury, NC, and Richard and his wife Michele, of Mount Ulla, NC, by his sisters Marie, Laura, and Dolores, of Brooklyn and Staten Island, New York, and by many nieces and nephews. Frank was born on October 13, 1935 in Brooklyn, New York, the second child of Frank and Laura (Pedreschi) Raffa. He was a veteran and served in the United States Army. Frank had a very successful career in the baking and bread business. He initially worked in the family bakery and subsequently, worked for Bond Bread and thereafter, as a supervisor for Entenmann's, Inc., of Bay Shore, New York, for many years. Following retirement from Entenmann's, Frank was employed by Hertz. In his spare time, he enjoyed watching the New York Giants, playing golf, cooking, and gaming. No services will be held at this time. Cavin-Cook Funeral Home & Crematory, Mooresville, is serving the Raffa family. Condolences may be made to the family at www.cavin-cook.com.

The family of Frank Dean Raffa, Jr. created this Life Tributes page to make it easy to share your memories.

Send flowers to the Raffa family.