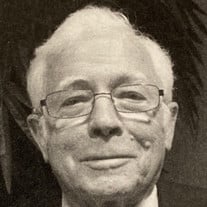 On March 20th 1929, Edwin George Townsend was born in New York City to Evelyn Anderson and George Townsend. Two years later the family expanded with the birth of Ed's sister, Ruth. When Ed was only four years old his father died of pneumonia leaving Ed's stay at home mother to care for and support two little children in the midst of a terrible depression and with neither government nor much family help available. When Ed was nine years old in 1938 his mother was no longer able to care for Ed and Ruth. She placed them in The Ottily Home for Children in New York which served Protestant children of the area, many without parents, some with one living parent. Ed and Ruth would continue to live there until each graduated from high school. From 1938 on the two siblings were placed in different sections based on age and sex and rarely saw each other. Ed remembered his terror at suddenly being separated from his mother and the many times he cried himself to sleep. Eventually Ed adjusted and grew to enjoy constant playmates and the German shepherd who lived with the children. In high school Ed was catcher on the baseball team, played in the Ottily Band and graduated at the top of his class. He remembered the humiliation of being known as an orphanage child and being given a bologna sandwich to carry to school each day having no money to buy lunch in the school cafeteria. Ed solved the money problem by joining other boys and sneaking out at night to walk to the nearby bowling alley where they were paid to put the pins back in place. After Ed graduated he returned to live one year sleeping on the floor in his mother's apartment and working odd jobs while trying to get the best college scholarship he could find. Ed boarded the train to Deland, FL and enrolled at Stetson University from which he would graduate with honors. On his arrival at college his first task was to find a job and he washed dishes in the cafeteria to remain in school. While there he attended a nearby Presbyterian church and eventually served as a student pastor his senior year. Due to the influence of the minister and feeling a call from God, Ed enrolled at Columbia Seminary in Decatur, GA. Newly married Ed graduated and accepted a call to be pastor at a small mission church on Long Island where he would serve until his retirement at age 65. During his service the church grew from 30 members to almost 400 and became self-sustaining. Ed loved being a pastor and took pleasure in knowing and caring for each member of his congregation. He became close friends with a Catholic priest at a nearby church and they were ecumenical before it was popular, exchanging pulpits once a year and celebrating Thanksgiving together. When Ed retired from the pulpit ministry he returned to school to get additional training as a counselor. Catholic Charities Of New York City employed him as an alcoholism counselor for seven more years of service. Ed found counseling very rewarding and remembered those years with satisfaction. Retiring a second time, his first wife having died, he moved to Ocean Isle, NC where his good friend, the Catholic priest, had already retired. Golf with a group of retired Presbyterian ministers became a weekly pleasure and Ed also did supply preaching on a regular basis. Having no children nor living relatives Ed moved to The Pines in Davidson in 2008. Ed became known for his warm, friendly, effusive personality and made many new friends. He became a participant in Davidson College Presbyterian Church and met Cary Johnston, a recently widowed resident of The Pines. The two were married in 2011. In 2012 Cary and Ed joined four other residents and headed to Russia to cruise from Moscow to St, Petersburg. Ed was especially eager to go to The Hermitage Museum and see the painting of The Prodigal Son. Alas, that was not to be. Ed had a severe fall shortly after arriving in Russia and spent the next ten days in a Russian Hospital while Cary sat by his bedside and prayed for his survival. Ed was medevaced to Carolinas Medical Center and spent another eight days in intensive care followed by weeks of rehab. Recovery was slow, but the brain repaired itself and Ed recovered to take many trips with Cary over the next few years. For many years Ed had served as a Protestant chaplain on Holland American ships and he now took Cary along at no charge. Many cruises including one to Rome and The Greek Islands were highlights of Ed's last years. Ed was predeceased by his parents, his first wife and his sister. He is survived by his wife of ten years, Cary Johnston, and four step children; Kathy Roche, Bert Wolf, Genny Bosak and Caryanne Melton. He died in the health care unit of The Pines under the care of Hospice and his doctor, Ron Beamon, who had become a special friend. Memorial gifts should be sent to The Pines at Davidson, 400 Avinger Lane, Davidson NC 28036, or to Davidson College Presbyterian Church, PO Box 337, Davidson NC 28036. Cavin-Cook Funeral Home, Mooresville, is serving the Townsend family. Condolences may be made to the family at www.cavin-cook.com.

The family of Edwin George Townsend created this Life Tributes page to make it easy to share your memories.

Send flowers to the Townsend family.