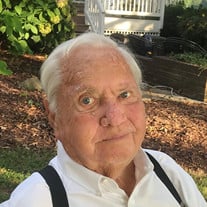 Duane Theodore Carter, 87, passed away on Thursday, March 17, 2022. He was born to the late Carl "Jack" and Velma Carter on December 18, 1934, in Mocksville, NC. He grew up there and in Mooresville, NC, where he graduated from Mooresville High School in 1953. After graduation, he attended Gardner-Webb College and NC State University before going to work as a Measurement Engineer for Transcontinental Pipeline Corporation. After a 5½ year relationship that began as high school sweethearts, Duane married Patsy "Pat" Blackwelder on March 30, 1957. The time during his 37-year career with Transco took Duane and Pat to numerous cities (Belton, SC; Stanley, NC, Gastonia, NC and back to Mooresville) where they made many wonderful lifelong friends. These years also brought them a family, 2 daughters, Pam and Connie "Lisa" and a son, Derek. After retiring from Transco, Duane went to work for the City of Shelby, managing its gas department. Duane always loved his time with both Transco and Shelby and the many special friendships that he developed over the years. Throughout these years and those after he retired. Duane loved his life on the lake, time with family and the many vacations that he and Pat took with their Airstream family, the members of the Carolinas Airstream Club, of which they were members for over 30 years. Duane always worked hard, enjoyed a good time and helped anyone who needed it. He was a loving father and grandfather who encouraged his family with love, confidence and most importantly, by example to be all that they could be. He spent 68 years with the love of his life supporting each other, making friends, making memories, and creating a close family who wanted to be together and had fun when they were. To all who knew him, Duane was synonymous with a joke and a laugh. He will be remembered with a smile on his face and always a helping hand. Duane was preceded in death by his wife, Patsy Blackwelder Carter, his parents, and his brother, Frank Carter. He is survived by his children, Pam Mason (Perry) of Southlake,TX, Connie "Lisa" Poore (Jeff) of Mooresville and Derek Carter (Debbie Rogers) of Mocksville. He is also survived by his sister Barb Neill (Allen) of Welcome, NC; grandchildren, Shannon Carter of Reidsville, Erin Benfield (Josh) of Mooresville, Anna Smith (Josh) of Mooresville, Hannah Goodman (Colby) of Frisco, TX, Brad Mason of Charleston, SC, Ashley Laurel (John) of Raleigh, Andy Poore of Mooresville, and Adam Poore of Wilmington along with 6 great-grandchildren. He is also survived by his constant canine companion, Boo. In lieu of flowers, memorials may be made to Fair View United Methodist Church, PO Box 27, Mt. Mourne, NC 28123 and S. Mitchell Mack Hospice House, 1325 Mecklenburg Highway, Mooresville, NC 28115. Cavin-Cook Funeral Home and Crematory, Mooresville, is serving the Carter family. Condolences may be sent to the family at www.cavin-cook.com.

Duane Theodore Carter, 87, passed away on Thursday, March 17, 2022. He was born to the late Carl "Jack" and Velma Carter on December 18, 1934, in Mocksville, NC. He grew up there and in Mooresville, NC, where he graduated from Mooresville High... View Obituary & Service Information

The family of Duane Theodore Carter created this Life Tributes page to make it easy to share your memories.

Send flowers to the Carter family.